Nick's Blog » Time Is Running Out

We are fast running out of time here in Apache Junction, and we still have a lot to get done before we head to Yuma for our Arizona Gypsy Gathering rally in March. We still need to replace the tires on or motorhome, replace the house batteries, I’m working on the new issue of the Gypsy Journal, and once it is printed, we need to get it mailed out. And, of course, there are still a few dozen rally details and chores that need completed too.

Aside from work related tasks, we still have some folks who want to get together for lunch or dinner, I want to get down to Tucson to visit my cousin Beverly, and I’d like to spend a few hours at the Family History Center of the LDS Church in Mesa. I’m not a Mormon, but their genealogy research facilities are open to anyone, and I’m running into a brick wall on my father’s side of my family tree.

A couple of weeks ago I bought Miss Terry a new Bernina Bernette sewing machine, and while I was working on the new issue of the paper yesterday, she went to a class at Quilter’s Ranch in Tempe to learn about all of the new machine’s bells and whistles. What, you say? A class to learn how to operate a sewing machine? No, Terry has been sewing since she was a youngster, this class was just to learn all about the features of her new machine and its many capabilities.

What the heck, when I got my Blackberry Storm last summer, Verizon had a free class to learn to use it! Of course, I still can’t do much more than make a call or answer e-mails on it.

Yesterday, my friend Sharon Del Rosario sent me an e-mail to tell me about a great country singer and yodeler 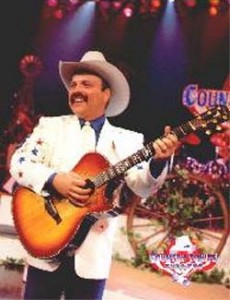 named David Bradley that she and hubby Don met in Quartzsite, and she suggested that I contact David and talk to him about performing at our Yuma rally. Since I value Sharon’s opinion, I called David and we worked out an arrangement for him to come to the rally and perform a concert on Monday evening.

David is the son of world champion yodeler Gene Bradley, and has been performing since he was five years old. He performed with the famous Sons of the Pioneers for five years, and was a featured solo artist at the popular Country Tonite Theatre in Branson, Missouri, where he won the Featured Entertainer of the Year award. You can hear some sound bites of David’s music on his Born To Yodel website. Check it out, and make plans now to attend his concert at the rally. Between David and the Michael Hargis’ concert, we’ll have plenty of reasons to tap our toes at the rally, won’t we?

Besides great entertainment and a full line of seminars at the rally, you will also have the opportunity to take advantage of some extra activities, including getting your RV weighed by Rick and Joyce Lang from RVSEF; taking behind the wheel RV driving classes from the RV School, and taking a class to obtain a non-resident Utah or Florida concealed weapons permit from Traveling CCW.

There is a separate fee for any of these valuable extras, and you should make arrangements before the rally if you can, because they all fill up fast. For RV weighing, contact Rick Lang at ricklang46@hotmail.com; for the RV School, contact Dennis Hill at rvschool@wizwire.com; and for the CCW classes, visit the Traveling CCW website.

News out of Elkhart, Indiana is that Heartland Recreational Vehicles LLC., builders of what I consider some of the finest fifth wheel trailers on the market, has purchased the rights to the brand names Prowler, Mallard, Pioneer, Wilderness, and other Fleetwood towable products, and will begin to build their own line of trailer models under those names. A company press release says they plan to begin manufacturing RVs under the acquired names in the next year. Given my personal opinion of Fleetwood products, I’m not sure this is a move I would have made, but if anyone can build something worthwhile under those brand names, I think it would be Heartland.

As busy as we are, Bad Nick still found time to write a new Bad Nick Blog post titled Dying With Dignity. Check it out and leave a comment.

Thought For The Day – Don’t believe all you hear, spend all you have, or sleep all you want.

4 Responses to “Time Is Running Out”