We woke up to wind and pouring rain yesterday morning, and it didn’t look like it was going to let up anytime soon. But we had an appointment at the Camping World in Mesa at 11:30 a.m., so I went outside and slogged through puddles of water to empty and flush our black tank, top off our fresh water tank, and disconnect our utility hookups. By the time I was finished, I was soaked.

With everything ready to go, I fired up our Cummins diesel engine, retracted our slide rooms and HWH leveling jacks, and we were ready to go. Well, almost ready to go. The indicator light and warning beeper said the right rear jack had not fully retracted. Sure enough, it was down about two inches. I hit the automatic leveling button to deploy the jacks again, and this time when I retracted them, they all came up fine.

It was only twelve miles to Camping World from Patio Gardens, so Terry drove the van behind me. After six weeks of sitting still, it was good to be back behind the wheel of our motorhome. 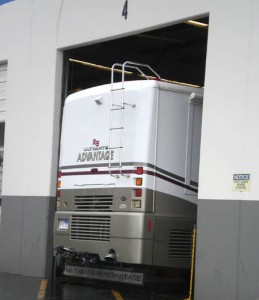 I don’t think I have ever seen any Camping World as busy as the one in Mesa was yesterday. The entire parking lot was jammed, and Terry could not even find a place to park the van, let alone me the motorhome. I finally left it double parked and went inside to check in with the service department, and they pulled it right into one of the work bays. 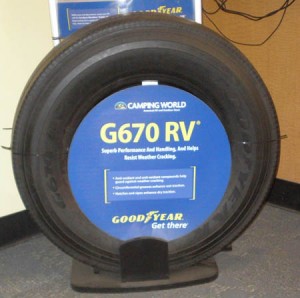 I have been shopping for tires and batteries for our Winnebago Ultimate Advantage, and had narrowed the tire choices down to the Michelin X7A3 and the Goodyear G670 RV. In my opinion, there really isn’t any real difference in quality between the two, and I have had a lot of RVers recommend both tires.

In the end, I chose the Goodyear tires, even though the price for all six, mounted, balanced, and out the door, was $200 more. My reasons may not make sense to a lot of people, but I have hated the Michelin Company ever since Vietnam, and Goodyear is an American company, as opposed to Michelin, a French outfit.

The only French things I like are fries, toast, and kisses. My not buying their tires will not affect Michelin’s bottom line one iota, but it was worth the extra money to me not to give them my business.

We also needed new house batteries, because the previous owner of our motorhome had installed regular starting 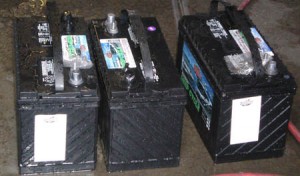 batteries instead of deep cycle RV batteries. We went with Interstate batteries, which many RVers use and seem to be happy with. Since we don’t plan to do as much dry camping as we once did, we could not justify the price of absorbed glass matt (AGM) batteries like we had in our bus conversion.

It had rained hard off and on all day long, but it finally started to clear up about 2 p.m., and there was quite a bit of blue sky showing. Of course, by the time they were finished working on the motorhome about 3:30, it had started pouring again. That lasted until we got the van hooked up to our Blue Ox tow bar, did our light check, and were ready to take off. Then the rain stopped. Go figure.

We had planned to boondock in the Camping World parking lot if it was getting close to rush hour when they were finished with our work, but the lot was still packed, and there wasn’t anyplace to park. So we drove 86 miles to Gila Bend, where we spent the night dry camping in the huge gravel parking lot at the Elks lodge. It was a windy trip, but we made good time, and at last the rain had stopped.

There were half a dozen other RVs at the Elks lodge, and when I went inside to register, we ran into longtime readers Bob Parker and Donna Huffer, who are also on their way to Yuma for our rally.

We will continue on to the fairgrounds in Yuma today, and get settled in so we can start working on the final details for the rally. It won’t be long now, folks!