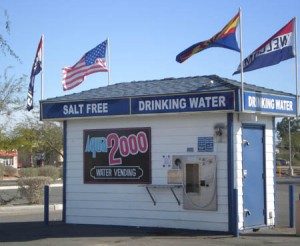 We had forgotten from our previous visits to Yuma just how bad the local tap water is. Most folks here buy water at “water stations” like this one, which can be found all over town. You bring your plastic jugs, put a quarter or two into a vending machine, and fill them up with filtered water. I don’t think we have seen water stations anyplace else that we have traveled. If you are coming in for our Gypsy Gathering rally, please try to arrive with a full fresh water tank if you can, for your own good.

We spent most of yesterday running around getting the pizzas for our Wednesday night pizza party arranged, and trying to find somebody at the WalMart bakery who could understand that we need to order 25 to 35 dozen donuts every morning during the rally. We need to go back, because everybody we talked to was just a little bit dimmer than your average donut. I think some people work at WalMart only because they’re not smart enough to get jobs that require them to memorize lines like “Do you want fries with that?”

Back at the fairgrounds, we spent some time checking out the location of the electric outlets scattered around the 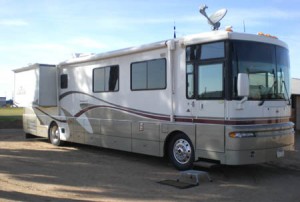 property. We will only have a few 30 and 50 amp electric hookups, but we need to reserve those for people with special needs. But we should be able to hook everybody up with 20 amp service, which is enough to keep batteries charged. That’s all we’re using here next to the stables, and we’re getting along just fine. Think of it as upscale boondocking!

Several people have asked if there will be WiFi available at the rally. The fairgrounds does not have WiFi, but we have found at past rallies that there are usually a few people with internet connections who leave them open to allow others to get online. These days, with air cards so cheap and the service available almost everywhere, I don’t know why anybody would depend on hit or miss WiFi for internet access. 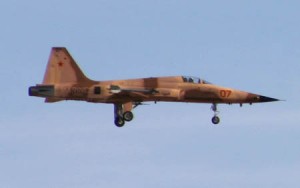 The fairgrounds is right across the street from the Marine Corps Air Station Yuma, and most of the day Northrop F5 and AV-8B Harrier jets are flying overhead. It is amazing to see how closely those pilots fly in formation.

I had never seen a Harrier land or take off before, and it is pretty 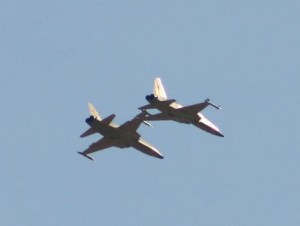 interesting. When they come in to land, they hover and then set down slowly, instead of making a high speed landing like other aircraft. It gets a little loud sometimes as they roar past, but that’s the sound of freedom, baby!

I need to clear up some confusion on the RVSEF RV Lifestyle, Education & Safety Conference to be held in Bowling Green, Kentucky June 3-6. They have me listed as an instructor on their website because we have agreed to be at future conferences, but we will not be at the June event. We have been promising ourselves for years that we are going to slow down, and this is the summer for that to finally happen. We just want to piddle around and just let the wind and whimsy blow us where they may. But, not to worry, RVSEF honcho Walter Cannon has put together an excellent program, and you’ll find plenty of top notch instructors at the conference. Whether you’re a new RVer, a veteran road warrior, or a wannabe, you’ll learn a lot at the conference.

Thought For The Day – I want to move to theory; everything works in theory.

13 Responses to “Don’t Drink The Water”