Yesterday morning, after dropping the last of the new issue off at the post office, we drove 110 miles south to Tucson to visit my cousin Beverly McKiddy. My parents and all of my siblings passed away years ago, and except for my two kids and my two granddaughters, the only blood relatives that I have left are a few cousins scattered around the country, and some nephews I lost track of years ago.

My cousins are all nice people, but I’m really only close to three or four them, because I seldom get to spend much time with the others. Beverly and I have been very close since we were little kids, and we never miss an opportunity to visit with her when we’re in Arizona. She is one of my favorite people in the whole world.

The fastest route between Mesa and Tucson is down Interstate 10, but what fun is that? Whenever we can, we choose the two lane roads, which in this case is State Route 79, also known as the Pinal Pioneer Parkway, south from Florence Junction to connect with State Route 77 at Oracle Junction, and then south on SR 77 to Tucson. It takes a few minutes longer, but it is a much nicer, more relaxing trip.

Traffic was light most of the way, and as we skirted the edge of the old community of Florence, we passed the imposing gun towers and razor wire fences of the Arizona State Prison, glad we were on the right side of the fence and the law, and free to travel when and where we want to. 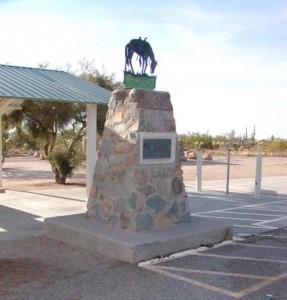 South of Florence we passed the memorial to old time cowboy film star Tom Mix, who was killed here in a one car accident in1940, when he drove his convertible into a dry wash, and a heavy suitcase in the back seat slammed into him and broke his neck.

We spent the day visiting with Beverly, and took her out to dinner at Luke’s Italian Beef on Fort Lowell Road, which is one of our favorite restaurants in the country. The lack of ambience is more than made up for by their huge, delicious sandwiches, and the best French fries we have found anywhere in our travels. We had a wonderful time with Beverly, and all too soon it was time to head back to our home on wheels.

We left Tucson a little after 7 p.m., and got home about 9:30. Since my night vision is poor, Terry drove back, and we enjoyed the ride, listening to good music on the radio and talking about how lucky we are to have the life and the relationship that we share.

Before I close this blog post, I need to clear up something about the Yuma Fairgrounds, to hopefully save folks some problems. At our previous rallies, the different fairgrounds had RV hookups that they rent to the general public, and have allowed RVers to come in several days ahead of the time and stay until the rally began.

But in Yuma, the fairgrounds does not have RV sites open to the general public. They have so many events going on that they just do not have room for RVs to stay there unless they are part of an activity. The fairgrounds manager has also told us that part of that policy is because they do not want to get into any hassles with the many RV parks in Yuma. They are allowing Terry and me, and a couple of assistants, to come in early and park in a far corner, so we can handle last minute rally details, but I’m afraid that folks arriving in the area a few days early will have to find other parking options.

Fortunately, there are some good alternatives. In addition to the RV parks in town, there are many places to dry camp nearby, including north of Yuma along U.S. Highway 95, and west of town, across the state line in California. We apologize to anybody who didn’t understand this and assumed that they could arrive a few days early, but unfortunately, we have no control over the fairgrounds’ policy.

Thought For The Day – How often do you apply the knowledge you spent so much time and effort seeking?

3 Responses to “Day Trip To Tucson”