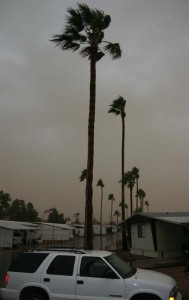 The weather forecast has been for rain all week, though it seemed to come in spurts, with periods of blue sky in between. But Wednesday night it began to rain in earnest, and it hasn’t stopped yet.

The rain was accompanied with high winds that whipped the palm trees in our park, 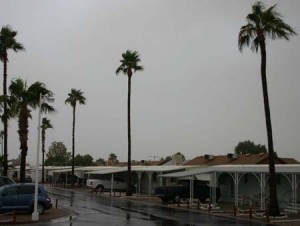 and about 4:30 p.m., the National Weather Service issued tornado watches for southwest Arizona, including Yuma, Quartzsite, and Phoenix! That almost never happens. Up in the high country, heavy snow was falling, with accumulations measured in feet.

There were flash flood warnings for the entire state, and weather reports said that Oak Creek, near Sedona, could crest at 20 feet above normal. Yuma got its normal entire year’s rain accumulation in just one day! It was not a good time to be traveling, and while I was glad we were safely parked with full hookups, I was worried about the many friends we have who are boondocking in the desert at Quartzsite.

Since we get the east and west coast network feeds out of New York and San Francisco, I cranked up the rooftop Winegard batwing antenna, and was grateful to Mark Didelot for setting up our converter box so we could tune in the local channels and get more direct weather reports.

Unexpected bad weather is why we always keep our fresh water tank at least half full, and have enough fuel on board to run our generator, even when we are going to be parked for an extended period of time with full hookups. In fact, when we are going to be sitting still for a while, I always fill our fuel tank. I’m not sure about more modern rigs like our Winnebago, but in our old MCI bus conversion, condensation could accumulate in our diesel fuel tank if it was low and we were parked for several weeks. Having had to deal with that once, I don’t want it to happen again.

Because we lived in snow country in northern Arizona (yes, it snows in Arizona), Terry and I always kept enough provisions on hand to last us for a few days if we got snowed in. As RVers, we can’t carry a fully stocked pantry, but we always have food and fresh water on hand, just in case. There are times when living in a self-contained RV can be very nice.

Bad weather is not the only reason to be prepared. A few summers ago we were at the Thousand Trails preserve near Hershey, Pennsylvania for two weeks. During that time it was pretty hot, and they were having power problems. A transformer had to be replaced twice, leaving the campground without electricity.

No problem, we just opened our windows and ran our Fantastic roof vents to create an air flow, and if it got too hot, we buttoned the bus up and fired up our generator to run the rooftop air conditioner. Several of our neighbors came in with nearly empty tanks, and ran so low on fuel that their generators would not work. Most RV generators are set up so that they will stop drawing fuel from the RV’s tank when it drops below a certain level, to prevent you from running out and being stuck somewhere.

It’s been a long time since I was a Boy Scout, but that motto “Be prepared” still comes in handy.

Thought For The Day – If you don’t pick up the bat, you’ll never hit the ball.