As I reported last week, our Verizon air card has been giving us a lot of grief lately. We had frequent periods when service was very slow, and we were getting knocked offline over and over again. The problem happened at any time of the day or night, but more frequently in the evening, from about 6:30 p.m. until after midnight. As I wrote then, I’m sure part of the problem is just the sheer numbers of people using the cell towers, both for telephone and internet access.

I tried several fixes that I read about online, or that other Verizon users recommended, but nothing really helped. So yesterday I went to the local Verizon store to see if they had any ideas.

I was eligible for an upgrade under Verizon’s New Every Two plan, and the young lady who waited on me suggested that I swap out my USB 720 air card (which is actually a modem) for a newer model. I bought my air card before they had any restrictions on usage, and was concerned about losing my grandfathered status, with no five gigabyte monthly limit, even though I have only gone over four gigs once in two years. My customer service rep checked, and assured me that my unlimited status would remain in effect.

Since we travel all over the country as fulltime RVers, I also wanted a card that would still accept an external antenna. I had heard somewhere that no new Verizon air cards have an external antenna port. That was apparently not true, because she set me up with a USB 760 air card that does have the external antenna port, and she even threw in the adaptor cable that matches up with my Wilson Trucker antenna and amp. Total cost, after $50 mail in rebate, was $10. 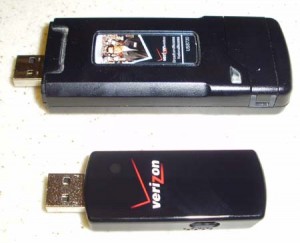 The new air card is about half the size of the previous one, as shown in this picture. It also did not come with a separate CD to install the updated VZ Access Manager software. The software is apparently built into the modem.

I came home, plugged the new unit unto my desktop computer, it automatically installed its software, and I was good to go. I then plugged it into my Cradlepoint MBR 1000 router, which recognized it immediately.

So far, it works fine. Speeds are still not as high as I have had in the past, but faster than with my old air card. The young lady at the Verizon store did say that here in Apache Junction/Mesa, and other places where they have a lot of users, we can expect slower service in the evening, which is when our problems have been the worst.

From about 6:30 p.m. until after midnight, my service slowed down, though not as bad as it was before. Terry and I both got knocked offline a time or two, but we were able to get right back on. Overall, it was a significant improvement over what we’ve been dealing with. Once I’ve used the new air card for a while, I’ll update you on its performance in a future blog.

Before I close this blog, I need to send a message to one of our Canadian blog readers named Andy who wrote me asking if we have subscriptions available to the Gypsy Journal for Canadian addresses. I tried to respond three times, but the e-mail bounced every time. Yes, we have many Canadian subscribers. Cost is $25 for one year, or $45 for two years. You can send us a check payable in U.S. funds, or click this Subscription Link and scroll to the bottom of the page to subscribe online.