We said a reluctant goodbye to Mike Steffen and left his place in Salt Flat, Texas a little after 9 a.m. yesterday morning, headed west on U.S. Highway 180. It’s always good to see our friends, and always hard to leave. But, the good thing about the RV lifestyle is that we can always go back and see them again.

We made a brief stop at Cornudas, a wide spot in the road that has an interesting history. Cornudas started life as a

stagecoach station, and today the “town” is owned by May Carson, a feisty lady who is the mayor, heads the water department, and owns the entire town.

May will serve you a great hamburger, and a piece of pecan pie to  die for, but if you give her any grief, she’ll show you the baseball bat she keeps behind the counter and let you know she means business. May is a character, as are most of her customers.

A while back May sold the town on eBay, but the deal went sour and she had to take it back, which made her many 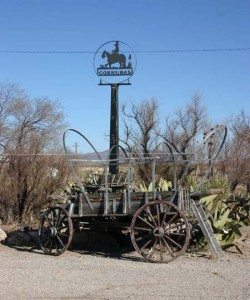 fans very happy. Cornudas is one of those places you have to stop at, just to say you’ve been there.

An hour after leaving Salt Flat, we got on the Loop 375, which took us through Fort Bliss and across the Franklin Mountains, past the National Border Patrol Museum. We did a story on the museum years ago, and I recommend it to anyone traveling through El Paso.

Loop 375, also called Transmountain Road, is a divided four lane road up an 8% grade over the mountains, and the Winnebago did fine. We were not setting any speed records, but we went up as fast as I wanted to, and I left our Allison transmission in fourth gear and let the exhaust brake carry us down to the other side safely.

Well, almost safely. As we were approaching Interstate 10, a jerk in an eighteen wheeler pulled out of a business on the left side and across the highway directly in front of us. I slammed on the brakes and managed to stop before we hit him, but it was darned close! I got on the CB radio and told him what a jerk he was, and that I hoped that when he got home, his mother ran out from under the porch and bit him, but he ignored me. He was a typical OPOP, which is a term I stole from one of our readers a few years back. It stands for Only Person On Planet, because idiots like that seem to think that nobody exists except them, and they’ll kill you to prove it.

After our blood pressure dropped back down to a reasonable level, we got on Interstate 10 only six miles from the New Mexico state line. The loop was a steep climb and descent, but a good road, and it sure beats the heck out of driving through El Paso on the interstate. There was about a mile long stretch where it was on surface streets after we left the military reservation, but it was an easy drive.

Except for slowing down for the Border Patrol checkpoint west of Las Cruces, we made good time, and arrived at the Escapees Dreamcatcher RV Park in Deming about 12:45. This is a regular stop for us when we travel west, because it’s right off the interstate, with easy access in and out.

We got parked and hooked up, and then ran to the post office to send out some orders that had come in over the weekend. Our good friend Deb Peters lives in Truth or Consequences, New Mexico, about 90 miles away, and we had not seen her in a couple of years. Deb drove down to Deming and we had a nice dinner together, catching up on our lives since the last time we were together. It was a real treat to see her again.

We had thought about staying here a couple of nights, but for some reason we only have the slower National Access signal on our Verizon air card, even though our cell phones both show high speed EVDO signals. I took the air card out of our Cradlepoint router and put it in my computer and updated it, but it did not help our speed at all. We have a lot of online work to get done, and it’s frustrating to keep getting knocked offline, so we’ll see how the day goes. We may hang around, or we may get fed up and say the heck with it and hit the road. Tune in tomorrow to see what we decide.

Thought For The Day – Laughter is the medicine of life.

5 Responses to “Salt Flat To Deming”