We had a long day yesterday. We left Apache Junction about 9 a.m. and drove to the fairgrounds in Yuma to check out the buildings we’ll be using for our RV rally in March.

Instead of taking Interstate 10 south all the way to Interstate 8, and than taking I-8 west to Yuma, we usually take State Route 347 through the small but growing community of Maricopa, hook up with State Route 84 for a couple of miles, and then hit Interstate 8 at Exit 151. This saves about 30 miles of driving, and except for a few miles of divided four lane roadway, the rest is a nice two lane road without much traffic.

We have noticed another possible route, State Route 238, which goes west from Maricopa to connect with Interstate 8 at Gila Bend, but we had never taken it before. Since we were in the van yesterday, we decided to give it a try. The first half of the two lane road was pretty bumpy, and the second half was a series of dips and sharp curves. We shaved ten miles off our trip, but because the road isn’t nearly as nice, it took us almost exactly as long as going our regular way. If you like drives in the country and have a smaller RV, it would probably be okay, but I don’t think I’d take my 40 foot motorhome through some of those dips.

We stopped at Augies Quail Trail RV Park in Gila Bend to drop off a sample bundle of papers. The Escapees had their Boot Camp for newbie RVers there earlier in the week, and we were hoping to run into anybody we knew, but in driving through the campground, we didn’t see any rigs that looked familiar. We know a lot of folks that stay at Augie’s when passing through this area, and it looked like a nice, clean little park.

When we pulled into the fairgrounds in Yuma, Gypsy Journal subscribers Ed and Stevi Hackenbruch greeted us. We met this nice couple several years ago, and have seen them a few times since then. They winter in Yuma, and were at the fairgrounds getting their table set up for a craft show this weekend. Running into them was a nice surprise.

We spent a couple of hours at the fairgrounds, making notes on the buildings, looking over the areas where we’ll be parking RVs, and going over some final rally details with the fairgrounds staff.

Then we stopped at the local Domino’s Pizza to talk to them about ordering over 100 pizzas for our traditional Wednesday evening pizza party. The price they quoted us was about 60% more than the Domino’s in Casa Grande or Celina, Ohio have charged us at previous rallies, and they’ll have to sharpen their pencil if they want to earn our business.

With all of that done, we drove around dropping off bundles of sample newspapers at some of the RV parks in Yuma. As we were pulling into one RV park, I told Terry that our friends Smokey and Pam Ridgely are workamping in Yuma this winter, and the name of this park sounded familiar. Just then Terry spotted Smokey’s beautiful Peterbilt truck coming out of the park. I stopped, jumped out, and waved Smokey down. He turned around and led us back to their fifth wheel, where we spent an hour or so visiting with Smokey and Pam. We have not seen them since they made a brief stop at our rally in Ohio in October, and we were glad we had the chance to visit for a while. 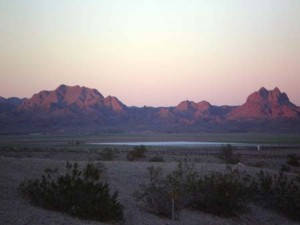 By then it was getting late and the sun was sinking low. We drove back eastward on Interstate 8, stopping to take a couple of pictures of the mountains near Wellton glowing in the last of the sun’s rays. That is not a natural lake you see in the foreground, just evidence of the how much water came down in last week’s storms.

On our way home, we passed by the Harrah’s Ak-Chin Casino near Maricopa, spotting 15 or 20 RVs dry camping in the parking lot, and made a mental note for future use if we’re nearby and need a safe, level place to park overnight.

It was chilly and sprinkling when we left our motorhome in the morning, but the weather was beautiful while we were in Yuma. Coming back, we ran in a downpour about five miles from home, and from the amount of standing water on the roads, I suspect it rained most of the day.

We got home about 10:30 p.m., having covered about 450 miles, and I sure was ready to get out of that van and back in our motorhome!

Thought For The Day – Politics is supposed to be the second oldest profession. I have come to realize that it bears a very close resemblance to the first.

3 Responses to “Road Trip To Yuma”