Nick's Blog » Back Home In Arizona

For a week or so now, we have been up early every morning, and that’s a habit we really need to break. It’s ruining my bad reputation.

We left the Escapees Dreamcatcher RV Park in Deming, New Mexico a little after 9 a.m. and drove west on Interstate 10 to Lordsburg, where we stopped at the Flying J for fuel, and then took U.S. Highway 70, the Old West Highay,  northwest into Arizona. We had never traveled this route before, and it is a nice two lane road that is a more direct route to central Arizona that taking Interstate 10, which dips south first before going north toward Tucson and Phoenix.

There were a few hills, but nothing serious, and we had to slow down through small towns like Safford and Thatcher, but we made good time. When we entered the San Carlos Apache Reservation, it was like going into a Third World country. The small Indian communities we passed through were depressing places where the yards of the houses were littered with trash, and the people we passed didn’t look very friendly.

We had planned to stay at the RV park at the Apache Gold Casino, a few miles east of Globe, which would put us within about a 90 minute drive north to our daughter’s home in Show Low, perfect for a day trip. But when we arrived, the convenience store that is also the office for the RV park was closed for several days, and when I went inside the casino to inquire about an RV site, nobody seemed to know anything, or offer much help.

This attitude of indifference reminded me of what I had come to know as the norm on the White Mountain Apache Reservation, which is the neighbor to our old hometown of Show Low. The Apaches are never rude, they just let you know that you’re welcome to come to their casino and spend your money, or pay to fish in their lakes, but don’t expect much in the way of hospitality.

I finally found a security guard who told me that they were “probably” full, and even if we could find an open site, he had no idea if we could stay or not, or how much it would cost us. He did say we could dry camp a night or two for free out by the highway in several long spaces reserved for eighteen wheelers, but when I asked him about security in the area, he just shrugged. We just did not feel comfortable leaving the motorhome unattended there while we went to Show Low. I guess that’s a holdover from our burglary last month. We have no fear dry camping anywhere within reason, but leaving the rig like that, with no RV neighbors nearby, just didn’t feel good.

We were only about 70 miles from Apache Junction, where Terry’s parents live, and our ultimate destination, so we decided to just drive the rest of the way in and find an RV park where we can get a monthly space, and then drive the van to Show Low in a day or three.

There was a lot of road construction on U.S. Highway 60 between Globe to Miami that was pretty much stop and go 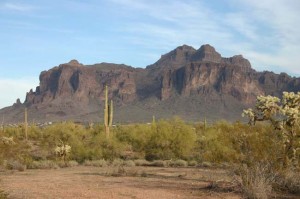 traffic, but once we got through that it was an easy drive the rest of the way. The Winnebago performed well coming through the mountains, and the 7% climbs and the trip back down into the Valley of the Sun was no problem with our Cummins diesel engine and exhaust brake. We arrived at the Elks lodge in Apache Junction and took a dry camping spot with several other RVs, and a beautiful  view out our windshield of the Superstition Mountains.

Once we were settled in, we drove over to Terry’s parents’ house and had a nice reunion with them, and I  know they were sure happy to see her. It had been a long day, so when we left them, we stopped for a quick dinner and got back to the RV tired and ready for bed. Before we began our fulltime RV adventure, Arizona was our home, and it’s good to be back.

We have a lot of friends and subscribers who want to get together, and by the time we got back to the Elks lodge, I had eight e-mails from people wanting to get together today or tomorrow. We’ll try to do some visting once we get caught up a bit. But the next few days will be devoted to finding an RV park, washing a couple thousand miles of road grime off our Winnebago and van, and then family time. We’ll be in the Apache Junction area for over a month, and we’re looking forward to some down time.

Thought For The Day – Live in the possibility rather than the probability.

3 Responses to “Back Home In Arizona”