Yesterday morning Terry’s parents, Pete and Bess Weber, stopped by to visit on their way home from church. Pete had only seen our Winnebago once, a few evenings earlier, but it was after dark, and he couldn’t see much of the outside. So he spent some time walking around checking it out before coming inside, and I think he was impressed.

A few minutes after Pete and Bess arrived, Terry’s sister Lisa also stopped in to say hello. I really like Lisa and always enjoy visiting with her. She’s a lot of fun, has a good sense of humor, and is drop dead gorgeous too! What a combination!

As I wrote in Sunday’s blog, we got an engine bay fire suppression unit and refrigerator compartment fire extinguisher from Mac McCoy at Fire and Life Safety a while back, but we have not had the time and good weather to install them. Yesterday both came together, and we decided to get the job done, so once our visitors left, we got busy. 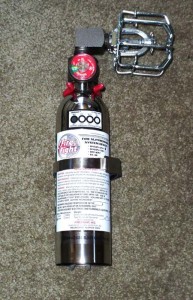 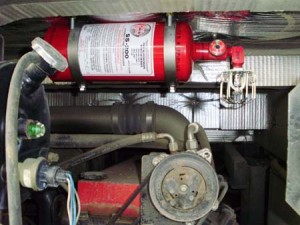 engine bay. This bulkhead is accessed from the floor of our bedroom closet, and once the removable floor panel is out, was held in place by four bolts. We drilled four holes for the mounting brackets, bolted the unit in place, and put everything back together. Again, we had to call Mac to be sure we were mounting the unit in the correct location.

Overall, just figuring out exactly how to mount the extinguishers, and unloading the closet to get to the floor and the bulkhead below, took longer than actually installing them. Both of the units are automatic, and are activated when the temperature inside the compartments reaches a certain level, so there was no wiring to connect.

We have seen a lot of pictures of RVs burning, and they really go up fast. We’ll travel and sleep a little easier now that we have these new safety devices installed.

With nasty weather predicted for this week, we will probably just take it easy, do a lot of reading and cruising the internet, and I’ll get some writing done. For the last month or so, we have had very spotty service on our Verizon air card, and the last few days it has really been frustrating.

From reading a couple of internet forums, it seems like a lot of RVers are experiencing slow service and dropped signals in different areas of the country. There have been several suggestions on how to remedy this, and I have tried them all, from updating the air card firmware to setting it to Broadband only so it won’t automatically switch to the slower National Access when both signals are available. Nothing has really worked. I suspect that as more and more people are getting cell phones and air cards, the situation will only get worse. Hopefully the techno geeks will come up with something to help get service back up to the reliability levels where it used to be.

While we were busy installing the fire extinguishers, Bad Nick was busy posting a new Bad Nick Blog titled My Mother, The Pedophile. Check it out and leave a comment.

Thought For The Day – Being ‘over the hill’ is much better than being under it!

4 Responses to “A Sunday Project”