Nick's Blog » Wading In The Muck

I feel like I’m wading in waist deep muck. I have so much I need to get done, but it’s like every step I try to take forward takes forever to accomplish, and I keep falling further and further behind.

Part of it is that I feel like I have hit an emotional and physical wall. I can’t concentrate, my brain feels fuzzy, I’m grouchy and irritable, and I’m worn out. All I want to do is lie down and take about a 36 hour nap. I know that it’s all a delayed stress reaction to recent events, and I’ll work through it. I just needed to snivel. Okay, enough of that.

Yesterday we had a lot of running around to get done. Our first stop was at the post office in Summerdale to mail off a bunch of orders, and then we went to Camping World in Robertsdale, where I picked up a written estimate to have our rooftop automatic TV dish replaced. Among the other things that happened during the burglary was that he (or they) ripped out the control box for the rooftop dish and the Dish Network receiver, threw them on the floor and stomped on them. Since Winegard no longer makes our model of dish or supports it and no replacement parts are available, we have to get a new one. 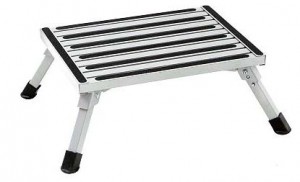 While we were at Camping World, we picked up a folding aluminum outside step with a 1,000 pound capacity for times when the distance between the ground and the step of the Winnebago is too much for our stubby little legs. 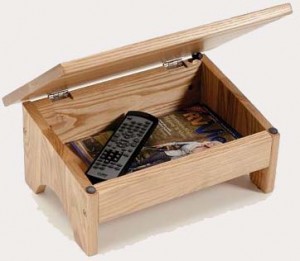 footstool to put under her feet when  we’re traveling to make it more comfortable for her. The top raises to give access to a small storage area for items like remote controls and such, Just what I need, one more place to lose my remote control!

We then had to run over to Daphne, on Mobile Bay, to pick up some items at Sam’s Club, and while we were in the area, we stopped at the Bass Pro Shop at Spanish Fort. Terry wants a pair of fuzzy moccasin style slippers from Minnetonka or TeePee for Christmas, and I was hoping we could find some there, but they didn’t have what she wanted.

We also went to an Office Depot to make copies of paperwork for the insurance company and faxed that to them. If you have ever wanted to be a crook for a living but are to afraid of going to jail, I think you should just open an insurance company. It’s like a license to steal. We have paid thousands of dollars in premiums over the years and never had a claim, but now that we need them, we are getting one runaround after another. One person tells you one thing and the next person contradicts the first one, things one tells us are covered the next one says are not, and “total replacement coverage” and “disappearing deductibles” are all bull$&@! when it comes time to pay off.

By the time we got all of that done, it was after 4 p.m. and we were getting hungry. I had spotted a Chinese buffet in a shopping center across the street from the Office Depot, and asked the clerk who sent our faxes if it was any good. She said she didn’t like Chinese, so couldn’t tell me, but one of her co-workers spoke up and said it was her family’s favorite Chinese restaurant, and that her sister drove all the way to Daphne from the far west side of Mobile to go there at least twice a month, so that was good enough for me. We adjourned to the Grand Buffet for dinner, and while I wouldn’t put it up in my Top 5 list of Chinese buffets, it was pretty darned good.

Back at the campground, I answered some e-mails that came in during the day, fiddled with the satellite and Dish receiver hoping against hope I could get them to work, and finally gave up in frustration. I know a lot of folks say that they don’t care much for TV, but I do. There are a few regular programs we watch regularly, and I am a news hound so I miss the daily news broadcasts and a lot of good documentaries on A&E, the History Channel, and such. Tomorrow I may drag out my old tripod dish and see if I can get any kind of a signal off that.

Of course, nothing stops Bad Nick. He has a new blog post titled Welcome Home, Sisters. Check it out and leave a comment.

Thought For The Day – There is great need for a sarcasm font.

6 Responses to “Wading In The Muck”