Nick's Blog » The I-10 Shake And Shudder

We pulled out of the Camping World in Robertsdale just after 9 a.m. yesterday morning, took State Route 59 north through Loxley to Interstate 10, and turned west. A few minutes later we were crossing Mobile Bay on the causeway, past the impressive bulk of the battleship U.S.S. Alabama, her big guns looking mighty intimidating.

On the west side of the bay we entered the George C. Wallace tunnel, and came out the other end, with the downtown area behind us. Every time we drive through here, I think every American city should be laid out the same way. No traffic hassles, just drive under the darn town!

Traffic was light, and we scooted across the lower edge of Alabama and crossed into Mississippi with no delays. We stopped at the Flying J in Gulfport, and I wanted to get propane while we were there, but the way the RV island is laid out, we had to stop just inside the RV entrance to the parking lot at the propane station, and as I was waiting for the attendant to come out and fill our propane tank, a big motorhome towing a car tried to pull in and was left hanging halfway out into the road because we were blocking the way. An eighteen wheeler was right behind them, so I pulled forward to the fuel pumps so we didn’t have a huge traffic jam. We have enough in our tank to last a while, so we’ll wait until we’re somewhere more convenient to get propane.

Back on the highway, we rolled past miles of flooded countryside, with a long line of billboards sticking up out of the water, advertising one headliner after another who will be appearing at the local casinos. We entered Louisiana, and took the Interstate 12 route around the north side of Lake Pontchartrain, avoiding the traffic in the New Orleans area. 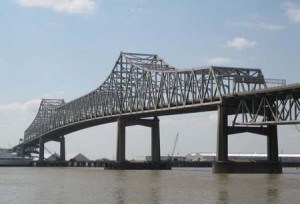 We ran into a traffic slowdown in Baton Rouge, and managed to thread our way through to come back out on Interstate 10, where we crossed the Horace Wilkinson cantilever bridge over the Mississippi River. This is the highest bridge on the Mississippi, and Miss Terry commented that I really seem to be handling bridges much better, because I didn’t snivel. I told her I was too busy trying not to run over four wheelers and hoping an eighteen wheeler wouldn’t run over us to have time to snivel!

We made good time all the way across Louisiana, and the promised stormy weather held off, although we did get some stiff wind around Lafayette, and just a sprinkle or two of raindrops. The Atchafalaya Swamp Freeway is an eighteen mile long elevated stretch of Interstate 10 that bridges the Atchafalaya River and its accompanying swamp, where trees stuck out of the water for as far as the eye could see. The roadway is narrow, and about as bumpy a stretch of pavement as you’ll find anywhere in North America. We shook, rattled, and bounced our way along, and I commented to Miss Terry that as nice as our Winnebago Ultimate Advantage is, our old MCI bus conversion handled this rough piece of highway a lot better. Interstate 10 across Louisiana has a reputation as a terrible roadway, and it is much deserved. More than one RVer we know has had things shake off their walls and out of cabinets as they bounced along.

Eventually the road smoothed out, and at Exit 36, on the east side of Lake Charles, we turned north for three miles on Pujol Road, a good two lane that passed a couple of RV parks. The road ends at a T intersection, and we turned right and went another mile to White Oak Park, a nice little Calcasieu Parish park on the bank of the Calcasieu River. The park has eight pull- through concrete RV sites with good 50 amp electric, water, and a dump station. At $12/night, or half price if you have a National Parks senior or handicapped pass, the park is a heck of a deal.

There was one fifth wheel trailer, which is unoccupied, and the beautiful Tiffin Phaeton motorhome of our friends Mark 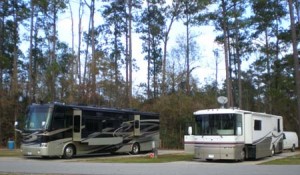 and Sue Didelot. We unhooked the van and pulled into the site next to theirs. Mark greeted us, and a few minutes later Sue returned from town and came over, and then she excused herself to go back to their coach, where she prepared us a wonderful dinner of salmon from their summer trip to Alaska, along with shrimp, and all the trimmings. Yummy! Thanks for the great welcome and the delicious dinner, Mark and Sue!

We had originally planned to push on to the Thousand Trails in Columbus, Texas today, but we can’t pick up the new issue of the Gypsy Journal until Monday. So we decided to stay here two nights, and drive through Houston on Christmas morning, when hopefully, there won’t be as much traffic.

We have three bars of EVDO on our Verizon cell phones, no problem getting a signal on our TV dish, and it’s not cold. Life is good.

Thought For The Day – A friend is someone you can see through and still enjoy the show.