We had hoped to get the work done on our coach early enough yesterday to be able to get on the road and put some miles behind us by dark. True to their word, the folks at Camping World in Robertsdale were finished by noon, and true to their record thus far, the folks at National Interstate insurance dropped the ball again.

They had promised to overnight a check to us at Rainbow Plantation RV Park to cover the costs of the repairs, and the staff at the campground told us they would call us as soon as it arrived. So we left early enough to be at Camping World for our 8 a.m. appointment, and they pulled the Winnebago right in. When the work was done, we still had not heard from the campground. I called our contact at National Interstate trying to get a tracking number for FedEx, and got his voice mail.

An hour went by, I called back, and he was out to lunch, so I left another voice mail. And then another. Finally, sometime around 3 p.m., I got a call from FedEx, asking just where the heck we were. It seems that instead of sending the check to us, care of the Escapees campground at 14301 County Road 28, Summerdale, Alabama, as I had instructed, and as the insurance company rep repeated to me twice, instead they addressed it to 14301 County Road 2828, Sommerville, Alabama! Big surprise, right? 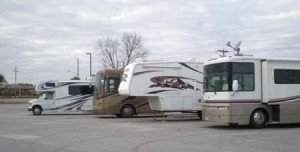 So, by the time we got the check, it was too late to hit the road. We switched to Plan B. Camping World has a half dozen or so pull through RV sites with 30 amp electric and water, free for customer use, so we decided to spend the night there and take off today. This isn’t a campground by any means, but it sure beats the heck out of dry camping, or driving ten miles back to Rainbow Plantation, only to retrace the same route today as we leave town.

I’m pleased with the job the RV tech at Camping World did, installing a new Winegard Traveler automatic TV dish to 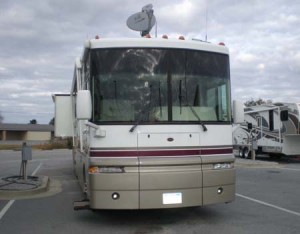 replace the older Winegard unit we had on our roof. During the burglary and vandalism, they trashed our Dish Network receiver and the control box for the Winegard. Since they don’t make that unit any more, it was not possible to just replace the control box, the entire unit needed to be replaced.

Here is a picture of it mounted on our rig. It’s bigger and heavier than the older dish was, and it seems to take about twice as long to lock onto the satellites. But with triple LNBs, it gets all three Dish satellites, 110, 119, and 129, at the same time, without having to reposition itself when we change channels, like our single LNB dish did.

We had visitors while we were at Camping World! Our friends Paul and Sally Wagner, who are our neighbors at Elkhart Campground in the summer, are staying at Coastal Haven RV Park in nearby Fairhope, and when they read in the blog that we were leaving the area, they came over to say goodbye. We always enjoy visiting with Paul and Sally, I just wish we had more time this trip to do so.

Joe and Marcia Jones are good friends who have the Chasing The Seventies RV blog. We have crossed paths with them many times in our travels, and they arrived at Rainbow Plantation yesterday afternoon, hoping to catch up with us. When they realized we had already left, they came up to Camping World to say hello. We always enjoy these two, and though our visit was brief, we appreciated them taking the time to come all the way back up from the campground to see us.

Terry and I love seafood, and since we are going to be leaving the coastal area today, once we had settled our bill with Camping World and our company had left, we went back to Big Daddy’s Grill for our last fresh seafood dinner. It was just as delicious as last time, and this is one restaurant we’ll be coming back to anytime we’re in the area.

From the weather reports, we may run into some stormy weather as we travel toward Texas, but we’ll just head out and see what happens. If it gets ugly we’ll pull off the road and wait it out. Our goal for today is Lake Charles, Louisiana, a distance of 350 miles.

We had planned to spend the night boondocking at the Isle of Capri Casino, where we’ve stayed before, but Gypsy Journal reader Mark Didelot called last night to tell us about a parish park where he and his wife Sue are parked in Lake Charles, which is just a couple of miles off Interstate 10. The cost is just $12 a night for 50 amp electric, water, and a dump station, with parking on concrete pads. If you have a Golden Age or Golden Access pass, which is now called the National Access pass, the cost is only $6/night. So we will shoot for that instead. Here’s hoping for a good travel day!

Bad Nick wanted you to have something to do while we’re traveling, so he wrote another Bad Nick Blog post titled Cheaper To Keep Her. Check it out and leave a comment.

Thought For The Day – Drive like your life depends on it, because it does!

4 Responses to “A New Dish And Old Friends”