Nick's Blog » Where Does The Time Go?

Can you believe Christmas is coming up in just over a month? Where does the time go? One minute you’re toasting the New Year and singing Auld Lang Syne, a week or two later you’re watching fireworks on Independence Day, and the next thing you know, they’re ringing bells in front of WalMart and you’re listening to Christmas carols on the radio.

I want time to slow down! I’m getting older and starting to realize that someday I’ll probably have to grow up too, but I’m in no hurry to get there!

Even the individual days seem to fly by. Yesterday we met Walter Cannon, executive director of the Recreational Vehicle Safety Education Foundation (RVSEF), and his lovely wife Amy for lunch at a nice little restaurant called Caffe Chocolat in Titusville. We had a nice lunch and chatted for a while, and before I knew it, three hours had passed!

We have known Walter for a long time, but it was nice to have the opportunity to just sit and visit away from all of the activity of an RV rally or show. We had never met Amy before, and she is a delightful woman whom Miss Terry really hit it off with.

Last year RVSEF tried to hold an RV education conference similar to the old Life on Wheels program, but downturns in the RV industry kept it from happening. I was sorry it was cancelled, because it is something that the RV world really needs. Long before we became instructors for Life on Wheels, Terry and I went there as students in our first year on the road, and it really helped us transition to the RV lifestyle.

Walter is a persistent guy, and he truly believes in the need for an educational program for RVers, so he regrouped and now plans to hold an RV Lifestyle, Education and Safety Conference in Bowling Green, Kentucky June 3-6, 2010. If you are a new or wannabe RVer, or even a seasoned road warrior, I really urge you to attend. It is a great investment in your RVing lifestyle. 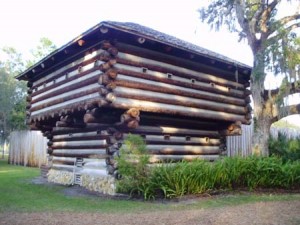 When we left the restaurant, we drove a few miles west of town on State Route 50 to Christmas, Florida to check out Fort Christmas Historical Park, which includes a replica of a Seminole War fort and several old Cracker style houses.

Unfortunately, time had gotten away from us (do you see a common 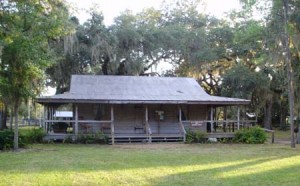 thread here?) and the buildings were already closed for the day. But we strolled around under the live oak trees, with their cloaks of Spanish moss draping their leaves, and just enjoyed the solitude. We hope to get back for a better look at the place while we’re in this area.

Among the things left to do on my bucket list is to see an alligator in the wild, and there are a lot of the critters here in Florida, so that shouldn’t be all that hard to accomplish. But in several trips through the Sunshine state, I have yet to see one.

A park ranger at Fort Christmas suggested we stop at a boat launch about halfway between the park and The Great Outdoors, where we are staying. He said it was not uncommon to see ’gators in the water or sunning on the banks there. We stopped to check it out, but there was an airboat firing up, and several trailers for other boats, and not an alligator to be seen. Terry said with all the noise and activity there, any alligator who might have been around had moved to quieter territory. Hopefully I’ll get to see one before we leave the South this year.

Thought For The Day – There will never be a time when life is simple.

16 Responses to “Where Does The Time Go?”