Nick's Blog » Up To My A$$ In Alligators

In Saturday’s blog, I mentioned that I had never seen an alligator in the wild. Always ready to offer suggestions and ideas, a lot of readers either posted comments or sent e-mails giving me tips on places where I could expect to find an alligator. 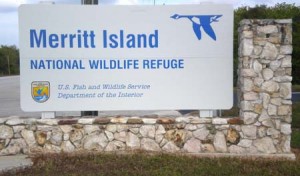 Several of you recommended the Merritt Island National Wildlife Refuge, just a couple of miles from downtown Titusville. It turned out to be the perfect place to cross seeing an alligator off of my bucket list. Located next to the John F. Kennedy Space Center, the wildlife refuge covers 140,000 acres, providing habitat for more than 1,500 species of plants and animals.

Yesterday, Tim and Ann Moran took us on a driving tour of the Refuge. Our first stop was the Visitor Center, where I got my National Park Passport stamped, and we checked out the exhibits on the Refuge and the area’s flora and fauna. I told a nice lady on duty in the Visitor Center that I was on a mission to see an alligator, and she gave us a map and some tips of places where we could expect to see plenty of alligators. 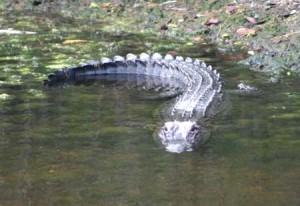 Her first suggestion was the Black Point Wildlife Drive, a seven mile loop that winds past wetlands, and includes a viewing area and restrooms. We had only driven a half mile or so before I spotted my first alligator in the wild, a small fellow maybe four feet long, lounging in the water of a shallow canal. I was thrilled, and we all piled out of Tim’s Jeep Cherokee and started snapping pictures. Very cool!

However, that was apparently the only alligator anywhere on the loop drive. We saw lots of birds, from egrets to herons, and plenty of fish jumping out of the water, but no more gators.

From there, we drove down Kennedy Parkway, a paved two lane road that ended at the Space Center. My friend from the Visitor Center said it was another good place to spot alligators, but we didn’t see any in spite of carefully scanning the banks of the channels and ponds as we drove by. I was disappointed, but what the heck, my goal was to see an alligator in the wild, and I had accomplished that, so it was a good day. 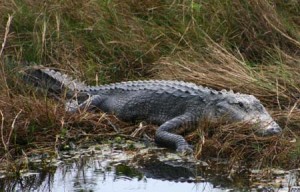 The final place the lady had marked on my map was the Bio Lab Road, a narrow six mile long dirt road sandwiched between the wide Intercoastal Waterway and a series of canals and brackish ponds. The south end of the road, where we turned onto it, was close to Playalinda Beach, one of a handful of beaches in Florida that allows nude sunbathing. Miss Terry shot me a look that let me know that was one thing I would not be scratching off my bucket list anytime soon! 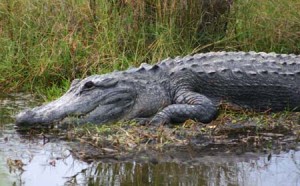 sunning itself on the bank of a canal, and again we all piled out of the Jeep to take pictures. Only a couple of hundred feet down the road, Terry saw the next alligator, another impressive specimen.

For the entire length of the road, we saw one alligator after another, either sunning themselves on the bank, swimming in the water, or submerged, with just their heads out of the water.

The alligators seemed to pretty much ignore us, and we were glad we had the canals between the alligators and us, though most of the canals were only a few feet wide, and I know gators can move pretty fast when they want to. 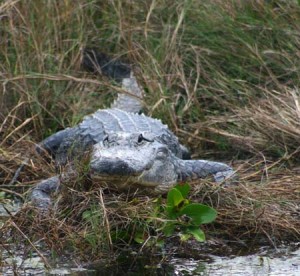 We were very careful to watch on both sides of the road, so that nothing slipped up behind us while we were looking the other way. Matted down areas in the grass showed us where the giant reptiles traveled. At one point Tim and Terry had climbed back into his Jeep, but Ann and I were still snapping away with our cameras when we heard a very loud splash in the water right behind us. We both jerked our heads around, then locked eyes, and made it back to the Jeep in record time!

So now I have seen an alligator in the wild. In fact, I have seen a lot of alligators in the wild. We lost count somewhere around ten of the creatures, but I’d say we saw at least fifteen, maybe twenty. And of course, as anyone who has spent much time in the outdoors will tell you, for every wild animal you see, there are plenty more that saw you and just kept still until you passed by.

Okay, scratch that one off the bucket list. Now where was that nude beach again? Anybody got some suntan lotion?

While I was off chasing alligators, Bad Nick was home writing a new Bad Nick Blog titled Stepping Up To The Plate. Check it out and leave a comment.

Thought For The Day – Experience is the result of a non-fatal mistake.