Nick's Blog » Touching Base With Friends

We have a lot of friends here in Alabama that we wanted to touch base with, and yesterday we got to spend time with several of them, both here at the Escapees Rainbow Plantation and at a couple of other nearby RV parks.

I met Tom Wiegman at an Escapade RV rally in Van Wert, Ohio several years ago, when he and his wife Karen were researching the fulltime RV lifestyle. Tom had some concerns that we talked about, and I assured him that if they really wanted to become fulltimers, they could make it happen. These days they are living their dream, workamping at a neat little RV park called Wales West, in Silverheel, Alabama.

Yesterday we dropped in for a visit, and while we missed Karen, Tom was there helping decorate for Christmas. Here is 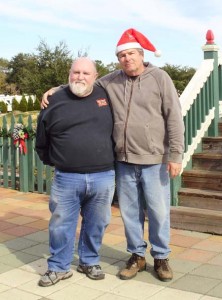 a picture of the two of us, note Tom’s headgear. Tom gave us a tour of Wales West, which is a neat place. The campground has its own railroad, with over a mile of tracks, and is popular with children from all around the region.

The campground’s owners love railroads and they love the country of Wales. The 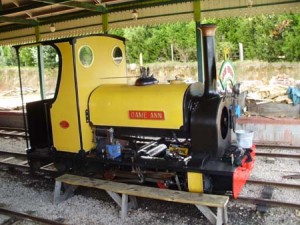 buildings at the campground are all modeled after buildings in a town they visited in Wales, and railroad enthusiasts love coming here to ride the train. If you’re looking for a quiet, off the beaten track campground with friendly people and great amenities, check out the Wales West website.

Our next stop was at Coastal Haven RV Park in Fairhope, where our 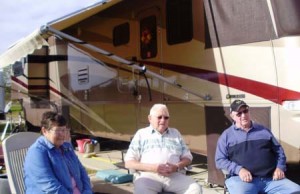 friends Paul and Sally Wagner are spending the winter. Paul and Sally are regulars at Elkhart Campground, where we spend a lot of time, and two of the nicest people you’ll ever meet. We timed our visit just right, because another dear friend from Elkhart Campground, Myrl Gautsche, was spending a few days there, so we got to see him too. Here are Sally, Myrl, and Paul enjoying the sunshine.

Back at Rainbow Plantation, Terry happened to look out our window and spotted Di Irrgang walking by. Di and her husband Dutch have been vendors at our Arizona Gypsy Gathering rallies, and we did not realize that they are parked just two spaces down from us!

Norm and Linda Payne have a home here at Rainbow Plantation, and they had invited a few people over for snacks and a visit, so about 4:30 we walked over to their place and had a wonderful evening visiting with Norm and Linda, Darrell and Judy Patterson, and Howard and Linda Payne, from RVDreams.com. In this photo, from left to right, you can see 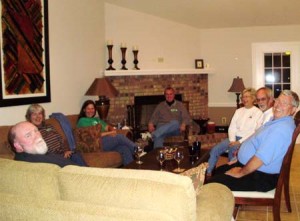 me, Judy Patterson, Linda Payne (of RVDreams.com) Howard Payne, our hosts Linda and Norm Payne, and Darrell Patterson. Miss Terry was behind the camera, so she isn’t included in our party picture.

It was fun to sit around and tell war stories from our lives on the road, compare notes on places we have visited and people we have met, and share some of the goofy mistakes we all make from time to time. Darrell told us about how he did $1,000 worth of damage to his truck and almost as much to his fifth wheel when he tried to use cement blocks to stabilize it.

I admitted that in our first month on the road, as we were leaving a campground I commented to Miss Terry about how friendly everybody was, because they were all pointing and waving their arms at us as we drove by. It wasn’t until I got to the exit and glanced into my side view mirrors did I realize that all of our window awnings were still out. By then there was no way I was going to stop and have all of those people staring at me as I got out and put the awnings up, so I just kept on going, while poor Miss Terry had to open the windows, reach outside and remove the awning catch straps from their hooks, and let the awnings roll up! It took me a long time to live that one down!

Bad Nick isn’t quite the social butterfly that I am, so while I was out visiting folks, he was home writing a new Bad Nick Blog post titled Media Whores. Check it out and leave a comment.

Thought For The Day – Nothing sucks more than that moment during an argument when you realize that you’re wrong.

3 Responses to “Touching Base With Friends”