After a chilly night in the parking lot of the Wal-Mart in Gallipolis, Ohio, we were up bright and early yesterday morning. There were several things we wanted to see locally, so I went inside the store and obtained permission to leave our motorhome there for a couple of hours while we went exploring in the van.

Gallipolis was settled in the late 1700s by French aristocrats who fled the old country to escape the guillotine. It is the hometown of Bob Evans, founder of the Bob Evans Restaurant chain, and the family farm is now a tourist attraction that includes an RV park offering water and electric hookups and a dump station for $15/night.

While exploring the friendly community, we noticed several back in RV sites with water and electric hookups at a Public Access boat launch on the bank of the Ohio River downtown. I stopped at City Hall to ask about the sites, and learned that RVers passing through the area can stay either for free, for $10 a night, or for $25 a night, depending on which secretary you want to believe. For free or $10 a night, I’d stay a while just to watch the riverboats going by, but for $25 a night, I’d pass.

This trip it didn’t matter, because we had a lot of miles to cover yet.

We crossed the river on the Silver Memorial Bridge, and I think I may be getting over my bridge phobia, because I didn’t snivel once. The original Silver Bridge here collapsed in 1967, throwing 70 cars into the river below and claiming 46 lives. Maybe I’m not over my phobia after all, and I just figured lighting wouldn’t strike twice in the same place. 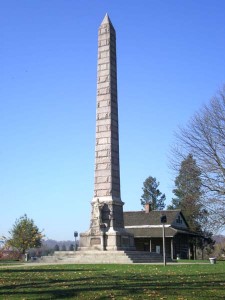 On the West Virginia side of the river, Point Pleasant is a charming little town with enough to see and do to keep visitors busy for several days. In 1774, a force of Virginia militia was ambushed here by Shawnee and Mingo Indians and the fierce battle lasted for hours. In the end, 75 militiamen were killed, along with an estimated 33 Indians. Many consider this to be the first battle of the American Revolution. Today a small park on the riverfront where the battle took place includes an 84 foot high granite obelisk honoring the men who fought and died here.

Point Pleasant also has a place in paranormal history. Here, in 1966, a strange 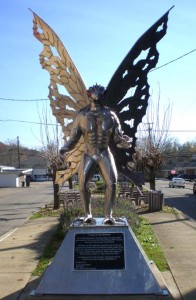 winged man-like creature that became known as Mothman was reportedly sighted. Since then there have been several reported sightings of the creature, usually before disasters. Several people claimed to see Mothman perched high in the girders of the original Silver Bridge before it collapsed. Since then, Mothman has become a worldwide phenomenon, with mention in documentary films, movies and television specials.

Sure, it’s probably just the figment of imaginations gone wild, but the folks in Point Pleasant took it serious enough to erect a state of Mothman on Main Street downtown, and there is a Mothman Museum just across the street.

With our sightseeing over, we returned to Gallipolis, picked up the motorhome, and crossed the river again. On the Ohio side of the river, U.S. Highway 35 had been a very nice divided four lane, but  a couple of miles into West Virginia, it dropped down to a two lane road with no shoulders, and lots of curves for maybe 25 miles, and then it became divided four lane again.

For the next hundred miles we climbed up and around one mountain after another, the Winnebago doing just fine. I can’t believe the power this thing has! The constant climbing did affect our fuel mileage, though. The day before, we averaged 8.1 miles per gallon across relatively flat Indiana and Ohio, according to the Silverleaf, and yesterday our average was right at 7 miles per gallon.

It cost $10.50 in tolls to travel from Charleston to the state line, but I don’t think they spend much of that money on highway improvements, because that was one rough road in many places!

We crossed into Virginia, stopped for fuel at the T/A truck stop in Wytheville, and in less than an hour we arrived at Mayberry Campground in Mount Airy, North Carolina.

Mount Airy is the hometown of television star Andy Griffith, and the picturesque town was the inspiration for the fictional town of Mayberry in the old Andy Griffith show.

Andy and his trusty deputy Barney Fife probably wouldn’t recognize the old town these days. It has a Wal-Mart Super Center, Staples Office Supply, Golden Corral Buffet, Lowes, and other major stores and restaurants.  Unfortunately, crime has come to Mayberry. The day before we arrived, a gunman killed four men in a shooting a few blocks from Main Street.

This is a beautiful area, with a lot to see and do, and we’ll be here a few days before we head on down the road. I’ll have a lot to share with you in tomorrow’s blog, so stay tuned.

Thought For The Day – Never be afraid to try something new. Remember, amateurs built the ark, professionals built the Titanic.

8 Responses to “Mothman, Mountains, And Mayberry”