We had a surprisingly quiet night at the Georgia State Welcome Center, and were on the road by 8:30 a.m., which is probably a new record for us, but we had a lot of miles to cover.

We had a little technical issue I wanted to have looked at, so I called the Camping World in Pooler, near Savannah, and the service manager said to come right in and they’d see what they could do. It was only nine miles to Camping World, so we were there in just a few minutes. I checked in and was told there was one rig ahead of us, and it would probably be about an hour before they could get us into the shop.

Since we didn’t have an appointment, I figured that was pretty good. But an hour later, they still had not pulled that motorhome into the service bay, so I asked again about the time frame. Then I was told it would be about 1 p.m. before they could get to us. We decided that we’d deal with it when we got to Florida.

We got back on the highway and had a quick trip south to the Florida state line, even though we drove through a 20 mile long construction zone north of Brunswick. Regular readers Lucille and Larry Tillotson had e-mailed to advise us to take the I-295 bypass around Jacksonville rather than stay on the more challenging I-95 through town, and we found it to be an excellent road. 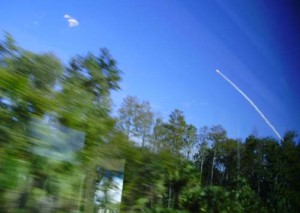 We knew that the space shuttle Atlantis was supposed to be launched at 2:28 p.m., and I told Terry we might get lucky and see it. She got her Olympus digital camera out, just in case, and sure enough, right on schedule, we saw it streaking toward outer space.

We were going down the highway at 60 miles per hour, but Terry 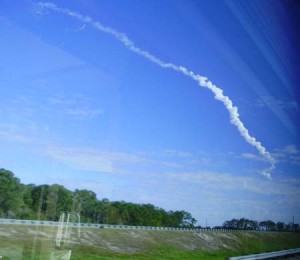 managed to get a couple of photos through the side window of our Winnebago before it sped out of sight, leaving a thick contrail in the blue sky.

Earlier Terry and I had been talking about the space program, and I questioned whether it was worth all the money we had poured into it. She pointed out that it has brought us all kinds of things we take for granted today, such as satellite TV programming and GPS systems. Okay, that’s a good deal I guess. We spend billions of dollars, and in return we get perpetual reruns of Roseanne and The Beverly Hillbillies, more home shopping channels than I will ever have time to skip with my remote control, and an electronic backseat driver nagging me to turn left.

We left the highway in Titusville and pulled into The Great Outdoors, one of the premier RV resorts in the country. When we said we were headed to Florida, our longtime friends Pete and Connie Bradish had generously invited us to be their guests for a few days, which we very much appreciate.

There are hundreds of full hookup 50 amp RV sites, as well as RV ports, chalets, and upscale homes, some of which sell for over $600,000. Lots here rent for over $1,100 a month during peak season, and the resort’s newsletter listed RV lots for sale by private owners for as much as $115,000. That’s a bit out of our price range, but we sure are going to enjoy experiencing the lifestyle of the rich and famous for a while! I think I just heard Robin Leach talking about champagne wishes and caviar dreams.

Thought For The Day – The heart that loves is always young.