We spent yesterday exploring part of the Crystal Coast; this interesting, laid back region of North Carolina. Here you can find everything from bustling small cities like Beaufort and Morehead City, to quaint little fishing towns like Harkers Island. No matter what your interests are, from history to collecting seashells, to fishing, or just sitting back in a beach chair and watching the seagulls fly by, you’ll find it all here.

Our first stop of the day was Fort Macon State Park, home to historic Fort Macon, which saw service from before the 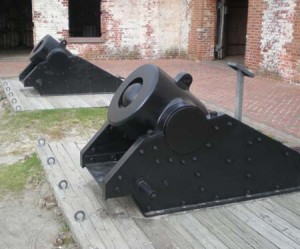 Civil War to World War II. The old fort was built as part of a chain of coastal defense forts, was seized by the Confederate Army during the Civil War and then recaptured after a siege by the Union Army, and has been restored to its glory days.

We enjoyed wandering through old barracks and climbing up to the fort’s walls to where sentries once stood guard duty, looking for enemy ships, blockade runners, and World War II German U-boats.

From Fort Macon, we drove 27 meandering miles to the charming little village of Harkers Island, where we stopped at the Cape Lookout National Seashore Visitor Center. It was here that we met a very nice man named Chuck Anderson, a fulltime RVer who is volunteering at the Visitor Center. He told us a little about his duties, we exchanged travel adventures, and then spent some time looking at the displays about the local wildlife and history. 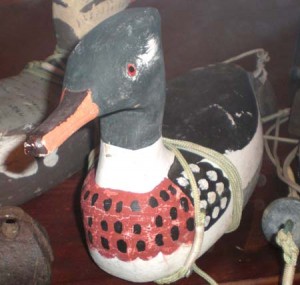 Almost next door to the Visitor Center is the Core Sound Waterfowl Museum and Heritage Center. This was one of the most impressive off the beaten path museums we have ever visited. We expected to see exhibits on the region’s hunting heritage, and there were certainly plenty of them, from duck decoys to massive ten gauge shotguns. 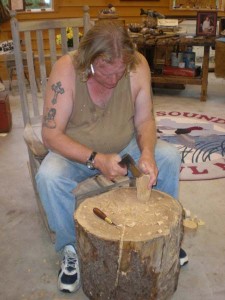 We also met a local woodcarver named Anthony Brooks and watched him at work for a while. Though he was born and raised on Core Sound, Anthony had a distinctive Scottish accent that he said he inherited from his grandfather, instead of the southern drawl we’ve heard most people use here.

What we didn’t expect at the museum were the impressive exhibits on the region’s history. There are displays on the fishing industry, a wonderful collection of model boats, quilts, and even a fully sailed fishing skiff on display. On the second floor, the several small towns strung along Core Sound have their own exhibits on their local history.

From Harkers Island, we drove back to Beaufort to tour the North Carolina Maritime Museum, which focuses on the 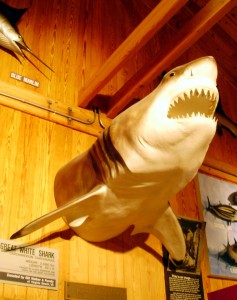 seafaring past of the area. Everybody from the notorious pirate Blackbeard to the brave men of the United States Lighthouse Service and commercial fisherman are remembered here. The museum also has displays of fish and marine mammals that inhabit coastal waters, including this Great White shark caught 40 miles off Cape Lookout. This massive critter measured over fifteen feet long and weighed 2,080 pounds! Suddenly I wasn’t all that interested in launching my kayak anywhere around here!

We had been bracing for predicted heavy rain and strong winds as the Tropical Storm Ida moved across the Southeast, but except for a few sprinkles while we were at Fort Macon, it was actually a pretty nice day. We’ll wait and see what today brings.

Whether you’re in sunshine or rain today, take a moment to thank a veteran for your freedom. Bad Nick made it a point to in today’s Bad Nick Blog, titled appropriately enough, Thank A Vet.

Thought For The Day – Wrinkled was not one of the things I wanted to be when I grew up.

One Response to “Exploring The Crystal Coast”