We have waited years to explore the North Carolina coast, and unfortunately, the bad weather has put a real damper (quite literally) on our visit. But, we are making the best of it and taking advantage of any break in the storm to get out and see things.

Yesterday we stopped to check out Beaufort’s Hammock House, located just a block or two from the waterfront. The oldest house in Beaufort, the old building has been a local landmark since the early 1700s. The house has been an inn, 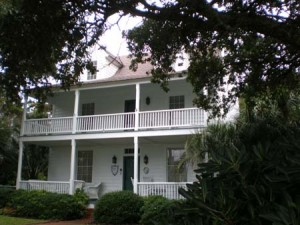 school, and private residence over the years, and it is not surprising that many claim it is haunted.

Local legend says the pirate Blackbeard used to stay here when he was in Beaufort, and one tale says that after spending several weeks here with one of his wives while his ship was undergoing repairs, he got tired of her constant nagging. So when he was ready to put out to sea, the story says he hanged her from one of the home’s live oak trees and buried her in the yard. Local folks say you can still hear her screams on moonlight nights.

Another story says that a man named Richard Russell once lived in the house, and when he took a slave up to the attic to discipline him, the slave pushed him down the stairs and broke his neck. Some claim that Russell’s ghost has been spotted stalking back up the steps, possibly in search of revenge.

As most regular readers know, Terry and I enjoy exploring old cemeteries. Whenever you think your life is rough, just spend an hour or so wandering through a cemetery reading the headstones, especially the older ones, and it will help you put your life in perspective.

We have found some tragic stories in old cemeteries, of course. Especially the graves of so many children who died at a very young age, back in the days when infant mortality was so high. But we have also seen some gravestones and learned some stories that have left us mystified, and a few have even made us chuckle. 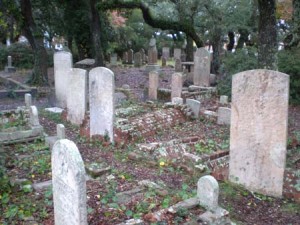 Beaufort has been home to seamen, pirates, soldiers, and settlers since the early 1700s, so there is a lot of history here, and much of it can be found at the Old Burying Grounds. A self-guided tour is a good way to get to know the old cemetery.

One grave is that of a British naval officer who refused to lie down in rebel territory, so he was buried standing up, so he could salute King George!

Another grave is the final resting place of Captain Otway Burns, one 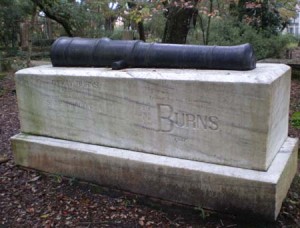 of the most successful privateers of the War of 1812. On one voyage alone, Captain Burns and the crew of his ship Snapdragon captured over $2 million worth of British cargo. After he died, a cannon from his ship was mounted on top of his tomb.

The other story is that of Nancy Manney French, who fell in love with her tutor as a young girl. Her father disapproved, so the tutor, Charles French, went west to seek his fortune, vowing to return for Nancy someday. He eventually settled in Arizona and became a chief justice. Charles French faithfully wrote letters to his beloved back in Beaufort, but the local postmaster was a friend of Nancy’s father, so he intercepted them and they were never delivered. Just before the postmaster died, many years later, he needed to clear his conscience, so he told her what he had done. Nancy never married, and as an old man Charles French returned to Beaufort and found her dying of consumption. The lifetime lovers were finally married, and Nancy died just a few weeks later.

Of course, one can work up quite an appetite playing tourist. Not to worry, there are plenty of great places to eat on 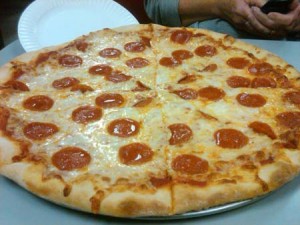 the Crystal Coast, including Luigi’s Pizza in Morehead City, a small place that serves up big pizzas. This was a small pizza we ordered for dinner. It was even more delicious than it looks!

While we were out exploring, Bad Nick was at home posting a new Bad Nick Blog titled I Don’t Want To Press One For English! Check it out and leave a comment.