Yesterday our friends Tim and Ann Moran played tour guide, showing us around Merritt Island and Cocoa Beach, Florida. Usually when we are visiting a new area, Terry or I are driving, so it was a real treat to just sit back and watch the scenery and not have to worry about traffic.

We saw some beautiful homes along the Indian River that must easily cost a king’s ransom, and while they were certainly impressive, I didn’t see one that I’d trade our Winnebago motorhome for. I did see several whose garages probably had more square footage than our diesel pusher has.

We then drove through Port Canaveral, where two huge Carnival cruise ships were docked. Terry and I love traveling in our RV, but one of these days we would like to take a cruise, just for the experience. The old section of Cocoa Beach is much different from most of the glitzy tourist traps we’ve seen elsewhere in Florida. It reminded me of a time when people came to Florida to experience the ocean and palm trees, not giant mice and plastic attractions.

Longtime Gypsy Journal subscriber David Spain has invited us to stop and visit his Comfort Inn in Cocoa Beach several times, so since we were in town, we stopped to introduce ourselves and say hello. David is an RVer stuck in the working world, and said that he gets to live vicariously through our writing. It was nice to get to know him, and if we ever find ourselves in this part of Florida and in need of a place to stay away from our motorhome, it would be David’s hotel.

Tim retired from the Navy, and one benefit of his service that he and Ann enjoyed was staying at Fam Camps, which are RV parks on military bases nationwide. They drove us to Patrick Air Force Base, just south of Cocoa Beach, to show us the Fam Camp there, and we were impressed! 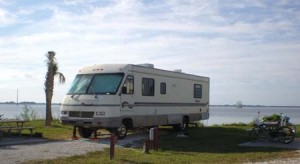 Located on the Banana River, the Fam Camp has 137 RV sites, many of which back up to the water’s edge, and a huge overflow area for dry camping. The Army was just as happy to see me go after one enlistment as I was to say goodbye, but many times I have wished I stayed in and made it a career. I told Miss Terry that after seeing the Patrick Fam Camp, I might just reenlist and do another sixteen years! She seemed to think that the Army probably wants me even less now than it did back in the day..

We saw several impressive Blackhawk helicopters parked on the flight apron at Patrick, and they sure are different 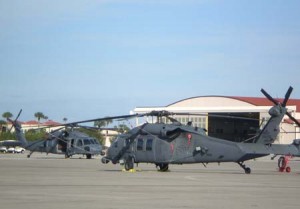 from the old Huey’s I knew during my time in the Army. I’d love to fly in one of those babies!

Across from the main gate at Patrick is a beautiful beach that the locals call Surf Beach. Though it is on Air Force property, the beach is open to the public and we stopped to check it out. 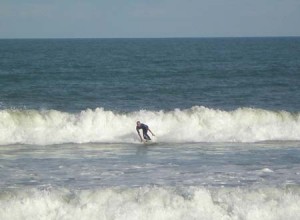 wave, and I managed to get a couple of pictures of them in action. It looks like a lot of fun, but I know it’s not for me. I have enough trouble standing upright on solid ground!

Thought For The Day – Bravery is being the only one who knows you’re afraid.

7 Responses to “Choppers And Surfers”