If the Peanuts cartoon character would have been with us yesterday, he’d have believed that there really is a Great Pumpkin!

After dropping off the new issue of the Gypsy Journal at our printer in Allegan, Michigan Monday afternoon, we drove 60 miles further to Muskegon to visit with Rocky and Berni Frees, two of our favorite people in the world. We didn’t have much time, but we managed to have a nice dinner, and then go back to their apartment for a spirited game of Mexican Train that lasted until midnight.

Yesterday morning, after a quick visit with Berni, we started back to Elkhart and our waiting motorhome. For a person who doesn’t live in a house anyplace, I sure do miss my home when we spend a night away from it! 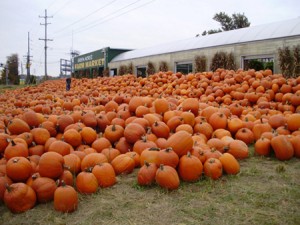 In Grand Haven, Michigan we stopped at the Green Acres Farm Market, which had the largest display of pumpkins I have ever seen. These are just a few of what they had to offer!

Who knew there were so many kinds of pumpkins in the world? There were huge pumpkins that must have weighed over a hundred pounds, pumpkins that were three times larger than a bowling ball, tiny pumpkins smaller than a baseball, and everything in between!

I’m not a big pumpkin fan. I’ll eat a half dozen slices of pumpkin pie in season, just to be polite, but I stay away from the whole jack o’lantern thing. Think about it – me with a carving knife and a candle. You just know that’s going to turn out bad! I’d probably cut my thumb off, and then knock over the darned candle and set fire to the motorhome while I was looking for a band aid!

But I have to say that I was impressed with the variety of pumpkins on display at Green Acres, and how many they had 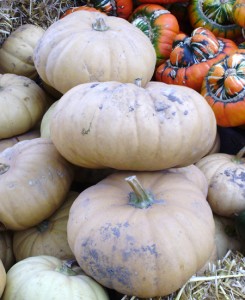 to offer. Sure, we’ve all seen the typical big orange pumpkin, but have you ever seen a Long Island Cheese pumpkin? They look like a roll of cheese, and their inside is a deep orange. According to the folks at the farm market, they make excellent pies, and can be kept in storage for up to a year! 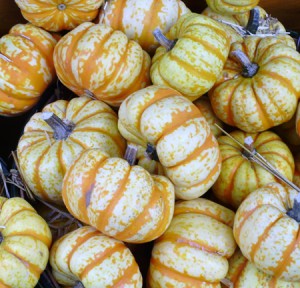 Or how about these miniature varieties? The are called Circus Minis, because they look like a circus tent, and they fit into your hand. They are used more for decoration than eating.

The farm market had lots of other goodies too, including apples, fruit, pies, and cider. We didn’t buy any pumpkins, but we did get some cider and apples. Yummy!

Back in Elkhart, my pal Butch Williams stopped by to visit for a while, and then Jim Beletti from the Heartland Owners RV Club came by. Jim talked to the company, and has arranged for them to have a few Heartland fifth wheel units on display at our Eastern Gypsy Gathering rally here at Elkhart Campground next year.

After Jim left, I wrote today’s blog post while Miss Terry logged in some orders that came in the mail, and then Bad Nick posted a new Bad Nick Blog called Close This! Then we watched TV and relaxed until it was time for bed.

Today we have a lot of chores to do, as well as winterizing our bus conversion for winter storage. Tomorrow we’re headed back to our printer’s to pick up the new issue of the paper and start getting it ready to mail out.

Thought For The Day – My idea of a well balanced diet is a cookie in each hand.

3 Responses to “Look Out, Charlie Brown!”