Nick's Blog » Getting Your Money’s Worth

We all want to get the most bang for our buck when we make a purchase. Whether you’re buying a pair of blue jeans, a television set, or an RV, you want to get your money’s worth, right? 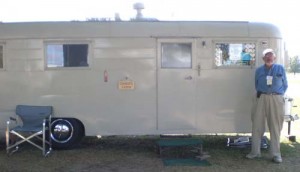 I don’t think anybody I’ve ever met has managed to make a better deal than longtime Gypsy Journal subscriber John Culp, who is here at our rally in the 1947 Westwood West Craft Coronado travel trailer that he bought brand new, and still travels with 62 years later! Yes, you read that right. John has had his RV for over six decades, and the octogenarian and his old rig are still going strong!

John said he lived in the trailer fulltime before he got married, calling it his “bachelor pad,” but when he and his wife got married, they decided after a couple of months that it was too cramped for both of them. Alone now, John pulls the trailer behind a van, and brings it to a lot of the Tin Can Tourists events. I never met anybody whose RV is old enough to draw Social Security!

The wind finally died down yesterday, and by late afternoon we even had blue sky overhead. But it was cold! The thermometer dipped into the mid-30s overnight, and a lot of folks said that as soon as the rally ends Friday, they’re headed south. 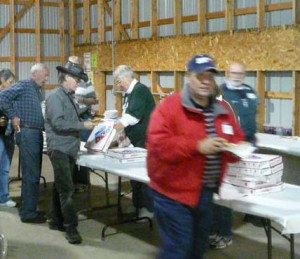 Yesterday evening we had our pizza party, and it always amazes me how fast Miss Terry and her volunteer crew can serve over 90 pizzas to a crowd of hungry RVers. Everybody complimented me on their efficiency.

After we all finished stuffing ourselves on pizza, Melissa and Larry Beahm, who perform as One More Time, entertained us with a wonderful concert that had everybody tapping their toes and singing along to the music. 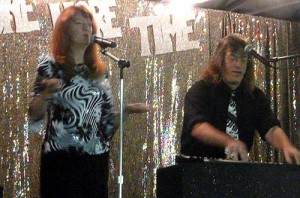 Melissa and Larry are fulltime RVers, who make their living traveling the country performing at RV rallies, nursing homes, and other events. They will be performing for us again tonight, and have promised a lot of “belt buckle rubbing” slow songs to dance to.

We tried something different with this rally; moving our vendors inside, in the same building where we have the morning coffee and donuts, and where the vendors present their seminars. It has worked out very well, and several of the vendors said it has been an excellent show for them. In fact, Ben and Gay Miller from Coyote Sales sold so many of their Wilson cellular phone antennas and accessories that they had to have more merchandise sent in by overnight delivery!

We did some shopping ourselves here at the rally. One piece of equipment I consider critical in an RV is an Electrical Management System (EMS) from Progressive Industries. The unit is designed to shut down incoming power to an RV if it detects high or low voltage, an open ground or neutral, or other problems that could cause serious damage to the RV and its electrical systems.

The EMS in or bus conversion saved us from damage several times over the years, and as impressed as I was with the unit itself, I was even more impressed with the service from Progressive Industries and their vendor, Daryl Lawrence, from Lawrence RV Accessories.

Two years ago while we were in Quartzsite, a board went out in our EMS, and even though it had been out for warranty for years, someone from the company drove several miles from town to where we were parked in the middle of the desert and replaced it for us! So yesterday we had Daryl install an EMS in our Winnebago, and now I’ll feel a lot more comfortable when I plug into a campground’s electric pedestal. Thanks for the great service and peace of mind, Daryl.

Thought For The Day – The secret to staying young is to live honestly, eat sensibly, and lie about your age.