Nick's Blog » The Search Is Over!

As most of my regular blog readers know, we have been looking for an RV to replace our faithful old MCI bus conversion. We have lived in the bus for 8 years and loved it, but our needs have changed and we needed something different. 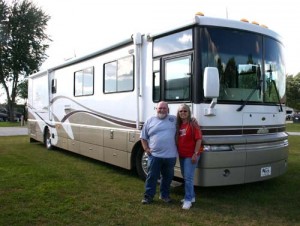 Our criteria was a 38 to 40 foot diesel pusher, with at least a 330 horsepower engine, and a living room slide. As many of you know, I have long been a critic of many production RVs, but I have always said that there are a handful of manufacturers whose RVs we would be comfortable owning. If we had been shopping for a fifth wheel, our search would have begun and ended with Heartland. Unfortunately, they don’t make motorized RVs, only towables.

Of the production model diesel pushers, our top three manufacturers of choice were (in no particular order) Allegro, Winnebago, and Newmar.

We did a lot of internet research, and looked at a lot of used RVs over the past six months, and almost bought a couple, but either we couldn’t quite get together on the price, or we couldn’t arrange the financing in time and someone snatched them out from under us.

Of all the rigs we looked at, the ones that really stuck out in our minds were the Winnebago Ultimate series, which was the top of the Winnebago line from 1998 to 2004, but every one we saw was out of our price range. 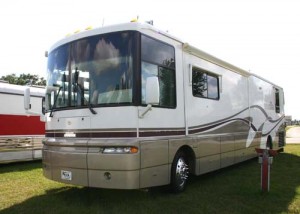 In early June we drove past a car dealer’s lot in Goshen, Indiana, and at the last minute out of the corner of my eye, I  spotted a beautiful 2002 Winnebago Ultimate Advantage. We made a quick U-turn and checked it out, and though it was everything we wanted in a new home on wheels, we knew it was out of our price range. We looked at a couple of other RVs since then, but our minds kept going back to the Winnebago, and after a couple of visits and calls to the dealership, we were finally able to get them to negotiate a price we could live with.

Our goods friends Ron and Brenda Speidel are longtime Winnebago owners, and they are even on the company’s Consumer Research Panel, so they know their Winnebago’s. Added to that, Ron is one of the most technical guys I know, and he has always wanted an Ultimate Advantage, so we asked them to go with us to check the rig out.

I told Ron I wanted him to go over it with a fine tooth comb, with the mindset that Brenda wanted to buy it, and his job was to talk her out of it. After crawling over, under, around, and through every square inch of the rig, Ron had just one thing to say – “If you don’t buy it, I will.”

So yesterday we took delivery of our new home on wheels, and we are ecstatic! It has two slides, a 350 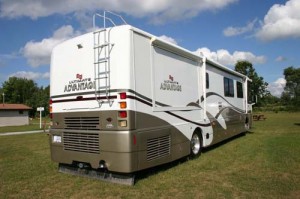 horsepower Cummins turbo diesel engine, six speed Allison automatic transmission, 7500 watt Onan Quiet Diesel generator, and every option we could ever want or need. Things like an automatic satellite TV dish on the roof, four door Norcold refrigerator, central vacuum system, and more. The rig has been babied, only 33,000 miles on it, all service done at the Cummins/Onan dealer here in Elkhart, and it lived inside a heated garage all its life.

It drives like a dream, and has more power than I know what to do with. In fact, when we were driving back to Elkhart Campground from the dealership, Ron and Brenda were following us, and had to call Terry on the cell phone to tell her to tell me to slow down. I thought I was doing about 35 and it was closer to 55!

We have the new motorhome parked next to the bus, and can’t wait to start moving in. Unfortunately, today we have to drive to Michigan to pick up the new issue of the Gypsy Journal from our printer, and then it will take several days to get it stuffed into envelopes and mailed out. And next week, we are supposed to be vending at the Carriage rally in Goshen, Indiana. But maybe we’ll at least sneak next door and just go sit in our new motorhome and grin at each other for a while.

Thought For The Day – When it comes to going after what you love in life, don’t take no for an answer.

46 Responses to “The Search Is Over!”