Nick's Blog » We Are Never Safe

We were talking to a couple who are considering extended RV travel, and one of their concerns was safety. They have heard urban legends about RVers being attacked while they spend the night at places like Wal-Mart, small town parks, and rest areas.

We assured them that those kind of things almost never happen and not to spend a lot of time worrying about them. As I told them, they are in more danger from a traffic accident then they ever will be from a criminal, as long as they use common sense, keep their doors locked, and don’t spend any nights parked in an inner city ghetto. We have spent many, many nights dry camping in every corner of this country, in truck stops, highway rest areas, commercial parking lots, even in wide pullouts on back roads miles from nowhere. We have never felt threatened.

However, that does not mean that any of us are ever completely safe. You never know what that idiot coming down the road at you, riding a ton of steel might do, You can be as vigilant as is humanly possible and still become a victim in an instant, as these pictures show.

One of our subscribers sent me the photo on the left the other day. She was driving down a city street 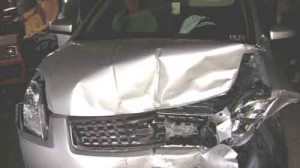 when a car driven by a seventeen year old girl who was text messaging somebody on her cell phone crossed the center line and hit her head on. Fortunately her airbag deployed and she was not injured.

Of the four girls in the other car, the front seat passenger had some cuts and bruises, but that was all, fortunately. Our friend said what really ticked her off was that the girl driving the other car never apologized, and never showed any concern for her own passenger. She was too busy being freaked out because her cell phone got broken in the accident! And there are airheads like that driving on every street and highway in America!

I took the photo to the right after a near miss I was involved in a few years ago in Tucson. I was driving down the street when the light gray car in the foreground roared passed me, driving halfway on 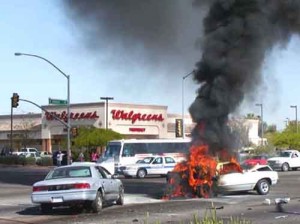 the sidewalk. Two blocks down the street he ran a red light and slammed into the white car, which burst into flames. Fortunately, the older couple in the white car escaped uninjured. As the story turned out, the driver of the gray car had stolen it and was making his getaway. He jumped out and fled the scene on foot.

No, I sleep just fine at night, wherever we are parked. It’s driving down the highway that sometimes scares the hell out of me!

Thought For The Day – You’re getting old when you get the same sensation from a rocking chair that you once got from a roller coaster.

2 Responses to “We Are Never Safe”