Sometimes the RV lifestyle allows us to not only go to new places, but to return to where we came from. We’re in Bowling Green, Ohio for the FMCA rally, and yesterday afternoon we drove 20 miles up to Toledo, a place with a lot of memories for me.

My father’s work kept us on the move for much of my earliest years, but when I was 13 we returned to our hometown of Toledo, and I lived there until I graduated from high school and went into the Army. I’ve only been back a couple of times since then, the last time almost ten years ago. So it was interesting to wander through the old neighborhood reliving memories from my youth.

South Toledo was a poor part of town, blue collar at best, but I never felt like we did without or were deprived. I had a loving family, good friends, and lots of good times. I would not have traded my teenage years for anything.

Yet, I knew I was not going to live there forever. When I was a teenager, everybody wanted to land a job on the Jeep assembly line or with Libby Owens Glass, or else get on the police force or fire department. A job that would “take care of you.” I didn’t want to be taken care of, thank you very much. I knew I could take care of myself, but it had to be someplace else. The first chance I got to leave, I never looked back. So why now, a lifetime later, do I feel drawn back to those narrow city streets of my youth?

The area certainly hasn’t improved. There are plenty of boarded up storefronts, yet many of the same little corner grocery stores and neighborhood taverns I remember are still open and doing business. 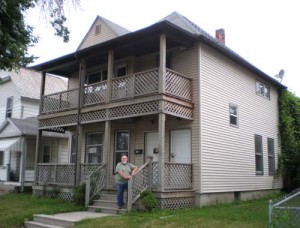 Here is a picture of me at the duplex house I lived in during high school. When we moved in, we had the upstairs and my buddy Ray Pitzen’s family lived below us. His sister Rachel was my first love and my friends were all jealous because she was the prettiest girl in the neighborhood. Today the old house is vacant and there was an eviction notice taped to the door for the last tenants.

After Ray’s family moved away, a series of neighbors rented the bottom half of the house. One New Year’s Eve my parents and I were standing on our upstairs porch when the neighbor below, who had had a lot too much to drink, came out onto his porch and decided to celebrate by popping off a few rounds with his .38 revolver. The bullets tore through the wood at our feet, narrowly missing us, but a chunk of wood embedded itself in my mother’s leg.

My Dad was a cop at the time, and when he grabbed his gun and handcuffs and ran downstairs, I wasn’t sure if he was going to shoot the man, or arrest him. Dad administered some street justice and then a black and white came and hauled the fool away.

My first job was working at Mr. Tsakos’ corner gas station. I begged my Dad to intercede on my behalf when the old Greek businessman didn’t want to hire a kid, because kids were unreliable. Then a week 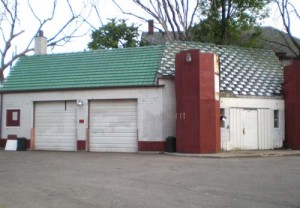 or two later all of my friends were having fun on summer vacation and I decided I wanted to play too, so I told my Dad I was quitting the job. He told me that I could either go to work every day, as I had promised Mr. Tsakos, or I could spend those eight hours a day in my room (way before a kid’s room had computers and TVs), but I wasn’t going to goof off after he had given his word I’d be on the job. I earned quite a bit of money that summer, and came away with a little bit of work ethic too.

And here’s my old school, Libbey High School. Boy, I couldn’t wait to leave that place! A few years ago there was talk of tearing the old school down, and I was sure glad to see that so far, it has survived budget cuts and consolidation. Now, please don’t tell my daughter this, because I have always told 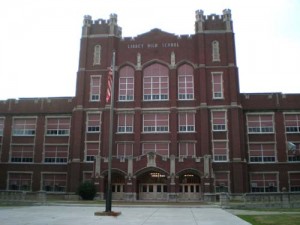 her that I walked eleven miles to school in knee deep snow, barefoot, and that it was uphill both coming and going. But we checked it on our van’s odometer, and it turns out it was just 1.2 miles from my front door to the front door of the school. (And I think I remember a pair of shoes or two, to be honest.)

One of our favorite hangouts was Walbridge Park, on the banks of the wide Maumee River, and across the street from the excellent Toledo Zoo. This was where we came to smoke cigarettes, away from parent’s prying eyes, where we came to “duke it out” to settle teenaged arguments, and where we brought our girlfriends when we had our first cars, to watch the submarine races. (Yes, some of them really did fall for that!) It was also here that my family had a going away picnic for me the day before I boarded an airplane for a ride that eventually ended in a jungle halfway around the world.

Terry and I sat on a bench overlooking the old river and I told her about some of my good times at the park, and the goofy things my pals and I did there. I sure am glad I have her with me to share those memories with, instead of some of the young ladies I steamed up the windows of my old Ford with!

I know I could never live in Toledo again, and I know I made the right decision to leave so long ago to pursue my own path in life. But it was interesting to go back to see the old neighborhood once again.

It was nice to take this trip down memory lane. Thanks for indulging me and coming along for the ride.

Thought For The Day – It was all so different before everything changed.

6 Responses to “Wandering Down Memory Lane”