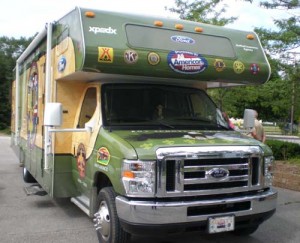 My cousin Terry Cook is very active in Scouting, so when he told me that a specially decorated RV is traveling the country to celebrate the Boy Scout’s 100 year anniversary in 2010, and that it would be in Traverse City yesterday, I accepted his invitation to go check it out.

The 32 foot long Class C, donated by Coachmen Industries, is scheduled to visit all 308 Boy Scout Councils in the lower 48 states between now and next February, when it will end its tour at the National Scouting Museum in Irving, Texas. Fourteen teams of Scout leaders from different areas around the United States will take the RV on separate legs of the journey. Traverse City was stop 186 on the “Century of Values Tour.”

The motorhome is wrapped in a vinyl covering depicting the world of Scouting. The curb side of the motorhome has a map of the United States, with the different legs of the trip marked out. The driver’s 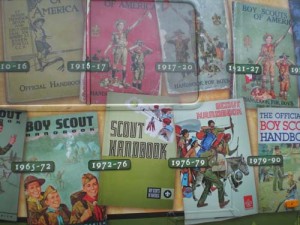 side has a mural of old Scouting magazines and publications, the doors have the Boy Scout emblem, and the rear of the motorhome is covered with a mural depicting the history of Scouting.

The mural was created by artist Bill Morrison, a former Boy Scout who achieved the exalted rank of Eagle. Morrison has worked designing posters for Disney movies, and for Hollywood animation studios, including the one that produces “The Simpsons.”

The mural is anchored by a portrait of Lord Baden Powell, founder of the Scouting movement, and depicts important events and people associated with Scouting. The crew driving the RV presented local Scouting officials with a framed 24 inch by 36 inch copy of the mural. Then there was cake and punch for everybody gathered, which included local 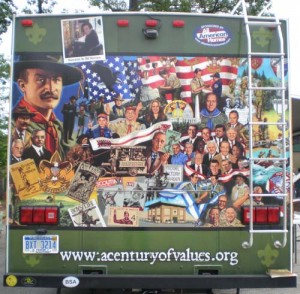 Scouts and Scouting officials, the mayor of Traverse City, and at least one State Assemblyman.

In all, the RV will cover more than 45,000 miles during its trip, and then will be donated to the Smithsonian Museum in Washington, D.C. I spent a few minutes chatting with one of the fellows who picked the rig up in Cleveland, Ohio and brought it to Traverse City, and he said he had never spent any time in an RV before, but now he’s hooked. When I told him about our life as fulltime RVers, he was fascinated. He had no idea that people actually lived and traveled every day of the year in RVs, and he couldn’t wait to call his wife and tell her about it. Do we have another future fulltimer in the wings?

Terry and I have enjoyed our visit to Traverse City, but it’s time to move on. We will be leaving here today and driving about 130 miles to Muskegon, Michigan to visit with Rocky and Berni Frees for a few days. I’m hoping we can get our kayaks out on the water again, if the weather cooperates. We really enjoyed paddling with them when we were there a few weeks ago.

Thought For The Day – Humans are not the only species on earth. We just act like it.