Yesterday we drove about 40 miles south to Holland, Michigan to tour Windmill Island Gardens, which features a 240 year old working Dutch windmill, shops with a Dutch theme, and beautiful gardens that are bursting with color in the early spring when over 150,000 tulips are in bloom.

Unfortunately, we were a little too late in the year to enjoy the tulips, but the trip was still worth our time. Out first stop was the Posthouse museum, an exact replica of a 14th century Dutch wayside inn. There we watched a short slideshow about windmills and the Netherlands.

The complex includes a beautiful 100 year old carousel that has been carefully restored, and children 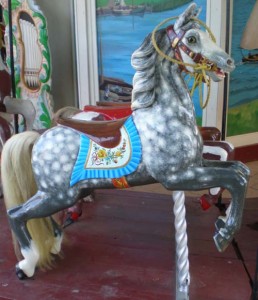 can ride free. I love carousels, and this one was a real work of art. Just watching one go round and around wakes up my inner child, who is always lurking just under the surface.

The shops offer all kinds of souvenirs, from authentic 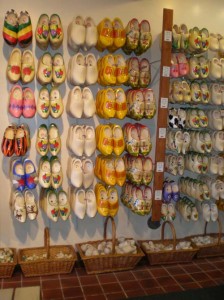 Delftware porcelain to delicious fudge, and wooden shoes! They even have wooden shoes you can try on, just to experience what they feel like. I’m clumsy enough on my own, so I passed on that opportunity.

The crown jewel of Windmill Island is the impressive windmill, one of a very few original Dutch windmills that exist outside of the Netherlands, where they are considered a national treasure. This one was given to the City of Holland as a gift from its home country. 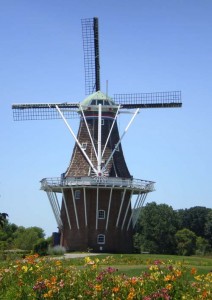 We took a tour of the windmill, and our tour guide, a young girl in authentic Dutch costume told us about its history and operation. 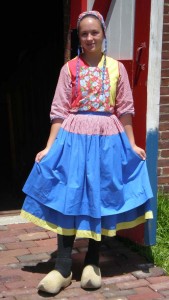 They still grind wheat at the mill, and visitors can purchase a bag of whole wheat graham flour at the souvenir shops.

During our tour, we learned that before World War II, over 10,000 windmills dotted the landscape in the Netherlands. Many were destroyed by the Germans when they realized that the local populace was using them to signal troop movements, and still others fell into disrepair and were torn down. Today less than 1,000 original windmills remain in the country. The windmill at Windmill Island, called  “De Zwaan” (meaning graceful bird, or swan), shows damage from gunfire from German fighter planes during the war.

We will have a feature story on our trip to Windmill Island in the next issue of the Gypsy Journal, with lots of photos and details about windmills I bet you never knew.

We have to leave Muskegon tomorrow, so we hope to get our kayaks in the water and do some more paddling today. And of course we can’t forget our nightly game of Mexican Train with Rocky and Berni! It’s been a fun visit.

Thought For The Day – When you’re old and fall down, you wonder what else you can do while you’re down there.

One Response to “A Dutch Day”