We have been enjoying our time here at Ray Behrens Campground on Mark Twain Lake near Hannibal, Missouri. The one drawback over the weekend was the many smoky campfires we had to put up with from weekend campers. At one point we had to turn off our roof vent fans because we were drawing so much smoke inside that our eyes were burning. But by Sunday afternoon most of them had gone back to their homes and jobs and the campground had really thinned out.

Our friends Ron and Brenda Speidel arrived Sunday for their month long camp hosting commitment at Mark Twain Lake State Park, across the lake from us. Once they were settled in the four of us, along with Bob and Molly Pinner, and Smokey and Pam Ridgely, drove a few miles to a restaurant near the little town of Perry called The Junction.

Ron had told us that the restaurant serves huge pork tenderloin sandwiches, so several of us tried 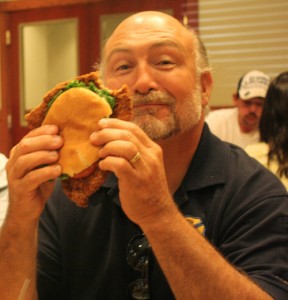 them. As you can see from this photo, Smokey looked like he had literally bitten off more than he could chew!

Molly took a picture of Ron, myself and Smokey posing with our big sandwiches, and you can almost hear our arteries hardening when you look at it. 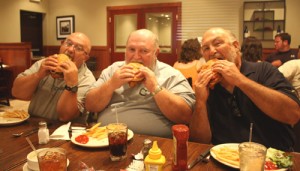 Unfortunately, even when you live the carefree life of fulltime RVers, mundane things like chores and illness catch up with you. Terry spent the first two days we were here doing laundry and cleaning the inside of our bus conversion. With that out of our way, she has come down with a bug.

I had a cold at Escapade that kicked my butt for a couple of days, and now Terry is feeling bad, with a headache, cough, and overall aches and pains. She’s taking medication, and hopefully it will run its course and she’ll feel better in a day or two like I did.

Our friends Ron and Jerrie Lea Hopf arrived at the campground yesterday afternoon, and once they were set up, Jerrie Lea came over to say hello. Not too much longer after that Ron and Brenda arrived, followed a few minutes later by Smokey and Pam, for a cookout hosted by Bob and Molly. Terry was feeling a bit better, so we walked across the road and joined in the fun.

If you’re not following the common thread in all of this, RVers love to eat, whether it’s dining out or just a group of good friends gathered around a picnic table enjoying good food. I don’t think any of us ever go hungry!

Thought For The Day – Forget health food. I need all the preservatives I can get.

6 Responses to “Chow Down!”