Nick's Blog » A Day At The Museum

We spent most of the day yesterday playing tour guide at the RV Hall of Fame Museum to members of the Heartland Owners Club, who were in the area for their annual rally. It was a lot of fun.

Here is a picture of Terry sitting with her new friend, Poker Alice. Poker Alice was a famous lady gambler and madam who was well known in Deadwood and Sturgis, South Dakota in the old days for 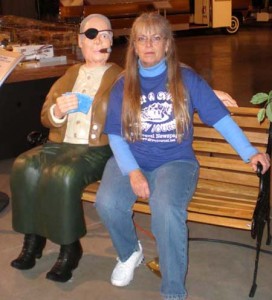 her luck with cards, the cigars she smoked, and the .38 revolver she carried in a pocket in case some card sharp tried to cheat her. I wrote a story about her which is in my book Highway History And Back Road Mystery. Of course, this isn’t the real Poker Alice. That luminary died in 1930 and is buried in Sturgis. But this likeness of the old gal on display at the museum is pretty accurate.

Things got off to a slow start, because of a scheduling mix up so Terry and I, and several other 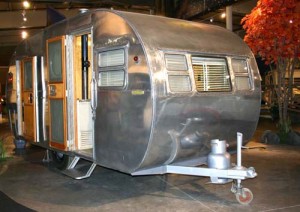 volunteers called in for the occasion, spent the first couple of hours just chatting with regular visitors to the museum. Then the chartered buses pulled up with the Heartland group and the floodgates opened. Over 150 folks from the rally had a good time seeing all of the neat old RVs on display, and we had a good time visiting with them.

In ten years of publishing the Gypsy Journal, we have been approached by several RV manufacturers about advertising, but Heartland is the only one we have accepted advertising from, because they convinced me that they build a quality product and stand behind it.

The Heartland owners we talked to at the museum were just as impressed. The factory is located here in Elkhart, and they sent a small army of service techs to the rally to handle any problems owners had with rigs. Everybody was impressed with how accommodating they were. One comment I heard was “They promised less and delivered more.” A fifth wheel does not fit our needs or lifestyle, but if Terry and I were going to buy a fifth wheel, Heartland would be the first and last one we looked at.

I also talked to some of the vendors who were at the Heartland Rally, and all of them were impressed with the reception they got and the amount of business they did. I really wish we would not have been sick so we could have attended. 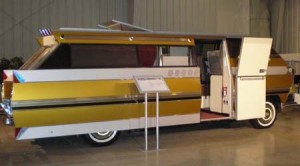 Unfortunately, we did have a Bad Nick sighting at the museum yesterday. One of the most unique vehicles in the collection is this wild custom motorhome called Star Streak II, built on a 1976 Cadillac Eldorado chassis, which has been featured on the Discovery Channel.

I enjoyed taking visitors into the RV to show them its many unique features, including a large screened roof vent. One family had a little boy who immediately started flipping switches and pulling on things.

His father immediately chastised him and told him not to touch things, but you know how kids can be. In no time at all he was reaching for a toggle switch on the wall and I told him “Be careful there, I’m not sure which switch it is, but one of them operates the ejector. A while back we lost a nine year old who touched it and went right through that hole in the roof. We looked for him everywhere, but the place closes at 5 o’clock, so what could we do? He still hasn’t turned up.”

The boy’s eyes were bigger than the RVs’ hubcaps, and his mouth was hanging so far open a sparrow could have flown in. I couldn’t resist taking it a step further, so I said “The security guard says sometimes late at night he hears the boy’s voice calling out, but it’s a big place and he’s an old man, so who knows?” The boy stuck his hands deep into his pockets and never took them out until he was well clear of the RV! Bad Nick!

I had another one of those small world events that happen to me all of the time while I was giving some folks a tour of the Cadillac motorhome. Paul Jones, the man who built it, was a graduate of the United States Military Academy at West Point, and the car has two West Point emblems mounted on the front fenders.

Back when I was a young solder, about 100 years ago, I spent a couple of years at West Point as a firearms instructor. (Sleep well tonight, I helped train the guys running the Army today!).

As one couple was looking at the RV, the husband saw the emblems and commented that he was sure familiar with them. “Were you a cadidiot?” I asked him, using the slang term we enlisted men assigned to the Academy used for cadets. “No, but I was a firearms instructor there,” he replied. As it turns out, he had the same job I did, only about four years before my arrival! How cool is that?

Thought For The Day – Time may be a great healer, but it’s a lousy beautician.

3 Responses to “A Day At The Museum”