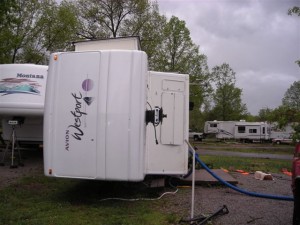 I have written about the dangers of bad weather when on the road in your RV, but as the pictures with this blog show, you can get into trouble even when parked in a campground.

A tornado tore through the NACO Natchez Trace 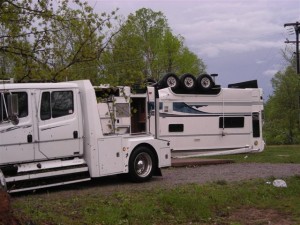 campground near Hohenwald, Tennessee Monday, destroying several RVs and other vehicles, and causing some minor injuries.

Our good friends Rick and Joyce Lang, who are the on-the-road weighing crew for RVSEF, were in the campground and Joyce sent me a link to a photo slideshow she took of the damage. Another reader also sent me several of the pictures included here. Joyce said they were okay, but the fifth wheel next to them was on its roof and had pushed in their bedroom slide. A tree limb also punched through one of the Fantastic vents and they got a lot of water inside. They are staying in a motel until the insurance company sorts through the mess. 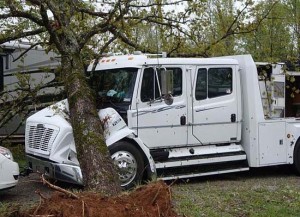 Joyce said the people in the trailer were not as lucky. They were both transported to the hospital and admitted for treatment.

As these pictures show, no RV is a safe refuge in a tornado or extreme winds. If you are traveling in Tornado Alley and the weather looks threatening, monitor your emergency weather radio, and know where the shelters are in your campground. Our old bus weighs a lot more than most RVs on the road, and we’ve spent time in a campground shelter during tornado warnings, so take a lesson from your old Uncle Nicky and get thyself out of that box on wheels if danger approaches! 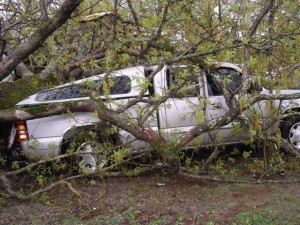 We have dodged tornadoes from Texas to Indiana and across the Midwest, and we’ve had some close calls, but we’ve been lucky. We accept that there is a possibility that we could get hit someday, just as we accept the fact that the next trucker coming at us down the highway may fall asleep and cross over into our lane. We plan ahead, we remain alert, but we don’t stop enjoying life because of what “could happen.”

On a different topic, I have been working hard on the possibilities of an electronic edition of the Gypsy Journal for those readers who don’t want to pay for mail forwarding or don’t want the hassles of dealing with paper. As I reported a few days ago, we found an online option to publish the digital edition, but it is prohibitively expensive.

I tried several different formatting options for a PDF version that I could e-mail directly to subscribers who wanted that option, but the file was almost 19MB, which was much too big for some peoples’ e-mail boxes, or downloaded very slowly on some internet connections.

Longtime reader Ken Wiseman and I bounced some ideas around by e-mail, but the problem was that the photos in the printed edition are at such a high resolution that the files were huge. Going in and replacing the photos with smaller resolution copies was too time intensive to be reasonable.

But I think I finally figured out how to do it. I chained myself to my desk yesterday and vowed not to get up until I got it right. I got the file down to 6.6MB, with very good results, and sent a sample out to several people to see how long it took to download, and how it looked on their computer screens.

On Miss Terry’s laptop computer and on my desktop, with our Verizon air card plugged into the Cradlepoint MBR1000 router, it opened in one minute and looked great. My pal Orv Hazelton reported than on his laptop with ATT&T air card it took a minute or less. My daughter has a cable modem at her house, and it took fifteen seconds to open. Terry’s mom had the same speeds with her cable modem. The only slow report was from Ron Speidel, who also has an AT&T air card. It took Ron about ten minutes to download. But Ron said they were experiencing very slow service at the campground in Missouri where they are hosting. The other day the 18MB version opened in a minute or two on his equipment. So I think we’ll chalk yesterday’s slow download to weather or internet gremlins. I sent out samples to several readers who had expressed an interest in an electronic version, and I’m waiting for their feedback. If you would like to see how it looks, send me an e-mail at editor@gypsyjournal.net.

Based upon what I saw yesterday and the feedback I’m getting, I think we can do this. I want to hear back from a few more people, but I think we’re there!

Thought For The Day – How come we choose from just two people to run for president and over fifty for Miss America?