It’s a good thing that we don’t spend more time with Terry’s cousin Carolyn and her husband Mel because it’s really hard on my waistline. Yesterday, Carolyn made Mel a chocolate cake, and I just could not in good conscience let him do to his skinny little body what I’ve done to mine, so I helped him eat a goodly portion of it. Hey, with me the damage has already been done, and besides, what are friends for, right? Don’t worry about it Mel, let her keep right on baking. I’ve got your back. 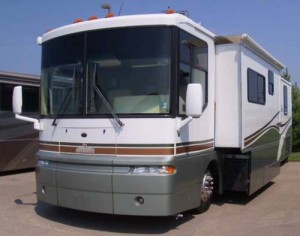 I mentioned in yesterday’s blog that we saw a very nice 38 foot 2001 Winnebago Ultimate Advantage diesel pusher at a local dealer over the weekend, and yesterday we went back and took it for a test drive.

Wow! We were impressed! Heck, let’s be honest, we fell in love! We’ve looked at a lot of very nice RVs over the years, and several that we could be comfortable in, but this one really stood out. It just screamed “Buy me!” My Dad used to say, “When something is right, you just feel it,” and this feels right to us.

It handles like a dream, has a ton of upgrades, rides great, and would work just fine for our needs. I had never driven a rig with the 330 horsepower Cat engine in it before, and I was really amazed at how well it got up to speed coming onto the freeway. Miss Terry also took a turn behind the wheel, and was very pleased with the way it drove.

They made us a very good offer, and we are going to look long and hard at putting a deal together. Several things would all have to click at once, including the sale of our bus to a person who has expressed a strong interest in it. So we’re not there yet, but if the stars all align just right, we just may be able to pull it off. Wish us luck.

Some of you may remember my April 23rd blog, in which I wrote about an RVer who had a headlight out on his pickup truck while we were in Albuquerque for the Affinity rally. He stopped at an auto parts store to buy a replacement light, and on the way back to the fairgrounds a policeman pulled him over and, after asking him several times if he knew he had a headlight out, which he acknowledged, and showed the officer the replacement light. The officer then gave him a summons, and told him that if he had said he did not know the light was out, he’d have only received a warning instead of a ticket. As I wrote in the blog about the incident, I really didn’t feel that was right.

The other day I got an e-mail from the gentleman who received the ticket, telling me that he was so upset he hung around and went to court to fight it, and won. He said the judge told the officer that he was sure the local police had better things to do that bait honest citizens into admitting guilt to a minor infraction, and then giving them a ticket for it.

I’m usually a very strong supporter of law enforcement. I come from a family full of cops. But this time around I have to agree with the judge. I think justice was served.

Thought For The Day – Middle age is not user friendly.