Nick's Blog » Escapade Was A Bust

Escapade is over, and are we tired! Standing around in a vending booth for eight hours a day may not seem like hard work, but believe me, it takes its toll. Poor Miss Terry has it much worse than me, because she gets stuck in the booth most of the time while I’m off visiting with the other vendors, trying to drum up advertising business and support for our own Gypsy Gathering rallies.

In terms of sales, this was our absolute worst Escapade ever. We had better sales at our very first Escapade, back when nobody knew us and the only things we had to sell were our Guide to Free Campgrounds and subscriptions to the Gypsy Journal.

Most of the other vendors I talked to were also reporting dismal sales. Part of that no doubt is because of the economy, but a lot had to do with the terrible weather and the fact that attendees were parked a long distance from the vendor building and had to either wade through the mud to get here, or wait for the open golf carts or the handful of minivans they were using for shuttle trams.

Having put on quite a few rallies ourselves, we know that you can’t control the weather, but everyone seemed to agree that the logistics of getting people transported around the fairgrounds could have been handled better. 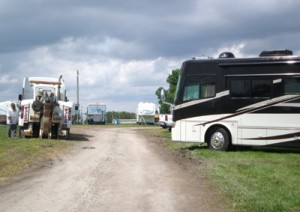 I think the only folks who made any real money at this Escapade were the local tow truck drivers, who have been busy for three days pulling people out of the mud. Our friends Ron and Brenda Speidel came over for a couple of days from St. Francois State Park, where they have been hosting, and once we closed our vendor booth down yesterday, we drove around watching the action. It took a while to get this beautiful Allegro Phaeton out of its parking place, but the tow truck driver really knew his business, and he got the job done, then moved on to the next stuck rig.

Even though the Escapade was a bust financially, we did have a great time seeing so many friends we have not crossed paths with in a long time. RVers love to eat, and we had dinner out every night with one group of friends or another. I think I put on at least five extra pounds this past week!

From here, we had planned to go to Albert Lea, Minnesota for an FMCA rally. But, after looking at the forecast attendance numbers, and knowing how poorly past FMCA area rallies have been for us, we have decided that driving several hundred miles north and spending several hundred dollars to hopefully break even just doesn’t make sense. So instead we are going to wander over toward Mark Twain Lake, near Hannibal, Missouri for a while, and then head further east to vend at the Heartland Owners Rally in Goshen, Indiana in early June. By the time we get that rally behind us, we’ll be ready to get the next issue of the Gypsy Journal printed and mailed out.

Thought For The Day – Borrow money from pessimists – they don’t expect it back.

13 Responses to “Escapade Was A Bust”