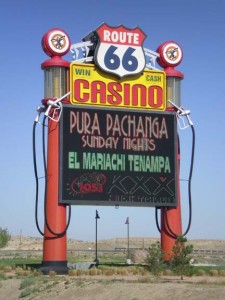 We spent Wednesday night dry camping in the designated RV parking area at the Route 66 Casino, and thought we might have a problem with our Onan 5500 generator.

We fired it up to run our rooftop air conditioner and all was going along fine, with the generator putting out 123 volts according to the meter on our Progressive Industries EMS system. Suddenly the voltage dropped to 104 volts and the EMS cut out, as it is designed to do in low voltage situations. We turned off the air conditioner and the reading was still 104 volts. With the EMS not engaged, which allows no power to come through, and thus no load on the genset, we were still reading 104 volts.

I let the generator sit for about an hour and fired it up, and it was putting out 123 volts again. But soon it did the same thing, dropping to 104 volts and staying. The AC was not on this time, and all we were using was 9 amps according to the EMS. We had last used the genset about three weeks ago and it was working fine then.

Yesterday morning we left the casino about 9:30 a.m., after waiting for rush hour traffic in Albuquerque to calm down, and headed east on Interstate 40. I think rush hour is actually 24/7 in Albuquerque, and construction zones with lane closures are just a fact of life there, but we managed to thread our way through it all and began to long uphill climb out of the valley. We were in the right hand lane, radiator misters going and moving slow, but we made it okay.

Terry fired the generator up again and we ran the rooftop air conditioner for about four hours with no problems, so I guess the gremlins who were causing problems the night before were taking the day off.

We traveled 190 miles to Tucumcari, where we left the interstate and took U.S. Highway 54 northeast. Add the depressing little town of Logan, New Mexico to your list of places to avoid. There were signs posted  all along the highway through the rundown downtown (what there is of it) saying “No Overnight Parking” and one sad looking RV park next to the railroad tracks. As we were coming into town a group of about nine young men were in an altercation alongside the road that looked like it was going to get violent very quickly.

We crossed into Texas, and tried to hold our breath as we drove past the huge cattle feeding operations near Dalhart. I like the aroma of beef sizzling on the grill a lot more than I do when it’s on the hoof in the muck. 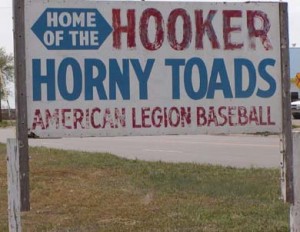 There was a lot of road construction in Hooker, and one sign I really wanted to stop and get a picture of said “We’re building a better Hooker for you” but there was no place to pull over. I wonder if they take custom orders…..?

Before long we crossed into Kansas at Liberal, home of the fantastic Mid-America Air Museum, which we did a feature on a few years ago. Liberal is also home of the Dorothy’s House Museum and an annual Wizard of Oz celebration.

I knew that one of my ex-wives was back in Arizona, but that left one still unaccounted for, so I kept a sharp eye out for witches until we were out of town. One can’t be too careful. 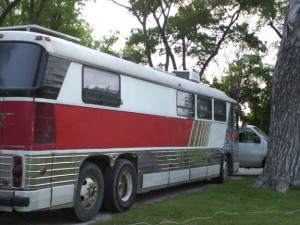 A half hour or so after we left Liberal, we came to Meade, home of the Dalton Gang Hideout, which we will visit tomorrow. We are parked for the night in the Meade city park, which allows free RV parking. There are a few water bibs scattered about, and the park has a dump station. We are sharing the park with a couple from South Dakota in a small fifth wheel, who stopped by to say hello, and a tiny Toyota camper from California.

We covered 456 miles yesterday, which was more than we had planned to drive, but it was a good day, the bus was running smooth, and traffic was light, so we just kept on rolling. It’s good to be back on the road again!

Thought For The Day – No one ever achieved worthwhile success who did not find themselves with at least one foot hanging over the brink of failure.

5 Responses to “Covering Lots Of Miles”