Nick's Blog » Some Call It Censorship

At least the weather cleared up here in Albuquerque, and though it wasn’t exactly warm yesterday, it wasn’t snowing either.

We had a busy day helping out in the RV Hall of Fame Museum booth, and managed to pass out a lot of copies of the Gypsy Journal, and to make a sale or two along the way. I think most vendors had a better day yesterday, mainly because the weather was better and more folks were out, and also because after the fiasco Friday with the bus schedules, a lot of people drove their cars to the fairgrounds.

The folks in charge of the rally also brought more buses in yesterday, and we didn’t see the long lines of people waiting for their ride back to the Balloon Fiesta Park. 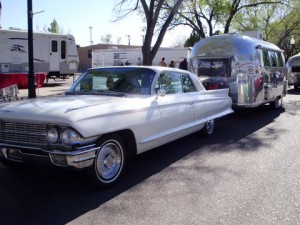 Some local people who have vintage cars and travel trailers brought them by the fairgrounds to put them on display yesterday, and they drew an admiring 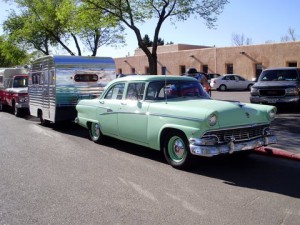 For Terry and I, the opportunity to see so many of our RVing friends makes any rally a special event. I can’t keep track of everybody who came by to visit with us, but there sure were a bunch of folks.

Dick and Gaye La Vigne, who were at our Arizona Gypsy Gathering rally are helping out in a friend’s vendor booth, and have stopped by several times, as have Bob and Clara Lee. Now I have to tell you, Bob is a real character. He’s older than dirt, and his jokes were worn out the first time he heard them on the school playground, but he’s such a nice fellow and Clara is such a sweetheart, that we look forward to seeing them over and over again.

Another good friend who stopped by is Michael Chang, whom we first met when he was a student at several Life on Wheels sessions, and who also joined us for our Ohio Gypsy Gathering rally last September.

We also got to visit with Jeff and Barb Franz. I owe Jeff a big thank you, because while we were at Life on Wheels in Harrisburg, Pennsylvania last year, I started seeing an alarming number of floaters in my left eye. When I reported it in the blog, Jeff, who is an optician, immediately contacted me and urged me to get immediate medical care because he said it was very possibly a torn retina. Based upon his warning, we got it taken care of that very morning, before things got out of hand.

There were a lot of other people who have taken the time to stop by, and I’m sorry that I can’t remember everybody’s name, but even if I could, I don’t think we’d have room here for a roll call. But we sure enjoyed seeing all of you.

I don’t want to be a complete jerk, but I have to address something here. I upset a few readers when I did not post their replies to my blog about the wacko who felt it was his duty to tell me the current administration is rounding up Vietnam vets for transport to a concentration camp.

The point of that post was to demonstrate how far out in left (or right) field people can get. As I closed that post, I asked people not to start sending me all of their political viewpoints, and joked that I have a delete button. This is supposed to be an RV blog, and overall I try to stay focused on the RV lifestyle, though I may exercise my editorial privilege and wander off track a bit now and then.

Still, some readers sent comments that were getting into the realm of a political debate, and I did not post them. In response, one writer accused me of censorship. Yeah, I guess you can call it that, if you want. It’s my blog, and I reserve the right to moderate the posts and comments.

I certainly encourage anyone who wants to express their political (or any other) viewpoints to start their own newspaper, or their own blog. Just log onto www.wordpress.com and have at it. It’s even free, and if you send me a link, I’ll read it at least once.

Thought For The Day – We need each other more than we need stuff.

6 Responses to “Some Call It Censorship”