We can tell it’s getting warmer down in the desert, because people are starting to head up to Arizona’s cool mountains. Last week Phoenix had its first triple digit day, and over the weekend we had an influx of neighbors at Show Low Lake Campground. Up until now, we’ve pretty much had the place to ourselves, except for the camp host and managers, and one other camper. 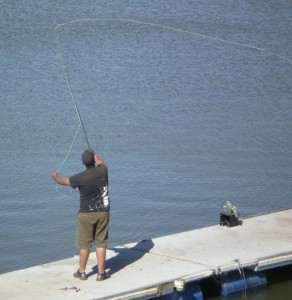 of the action at Show Low Lake, across the street from the campground. One fellow was casting with a fly rod, his line trailing out behind him as he whipped his limber rod back and forth. 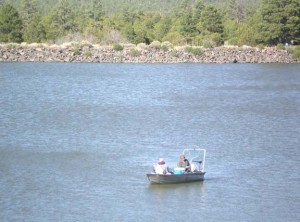 trying to get out of it at the dock. It was kind of like watching newbie RVers trying to back into a campsite.

Of course, it’s not just newbies who have occasionalproblems. After ten years of fulltiming, we pretty much have it down to a science, and with Miss Terry’s expert guidance, I can usually get into any campsite on the first try, with maybe just a little bit of fine tuning once I’m in. But, if there is a crowd of people standing around watching, I’ll run over the utility box, the hose bib, a stray French poodle, or anything else without the good sense to get out of the way. I just don’t do well under pressure!

Terry got the last of the envelopes stuffed with the new issue of the Gypsy Journal over the weekend, and today we’ll drive back to Flagstaff to drop them off at the mail service. Then hopefully we will have some down time to enjoy our grandkids before we hit the road again.

Melissa and Larry Beahm from One More Time wowed the crowd in Celina, Ohio last year, and they will be coming back with a brand new show this time around. We’re excited to have them performing for us again. Melissa and Larry are a fun couple, and they have been making a name for themselves performing at RV rallies and other events from New York to Texas. We’re excited to have them back again.

For the Arizona rally, we are bringing in an excellent performer named Michael Hargis, who has shared the stage with such big name acts as Chubby Checker, The Drifters, and The Oak Ridge Boys. After listening to Michael’s demo recordings, Terry and I both knew that we wanted to hear more from this talented entertainer. His range is really amazing!

If you haven’t made your plans to attend one of our rallies yet, mark them on your schedule now. And don’t forget, we still have vendor spots open at both rallies, so reserve your space now while it’s still available.

Thought For The Day – Standing in the middle of the road is dangerous. You will get knocked down by the traffic from both sides.

One Response to “RV Rally Entertainment”