With the Affinity rally over, yesterday morning we said goodbye to several of our vendor friends and made ready to pull out of Albuquerque. We were both more than ready to be somewhere else.

I don’t like cliques. I didn’t like them in high school, and I find them even more childish in people our age. There were several of them in Albuquerque, including a group who took exception to us dumping before we left, even though we were just one rig in a line of vendors doing so.

I try to be a nice guy about 99% of the time, but when my bullsh#& tolerance level gets exceeded, sometimes I get ugly.

So it was when one particular group gave us grief when we tried to dump in not one, but two different spots where other vendors had just done so. Finally Terry said to forget it, we’d wait until we got back to Arizona to dump, and I told her to pull the van up behind the bus so we could hook it up to our Blue Ox tow bar.

As she was maneuvering the van into position, one clown from this clique stalked up and demanded that I move because the bus was parked parallel in front of his and his friends’ RVs. I asked him if he was getting ready to pull out, since his slides were still out and they were all standing around.

“No,” he said, “but there is plenty of room all around here where you could hook up.”

I guess he didn’t like the look that accompanied my reply, because he returned to his pals and glared at us while we hooked up, did our light check, and I scrolled through my PressurePro readout to check my tire pressures. Normally I turn off the bus while I do this, so I don’t asphyxiate the neighbors with diesel fumes, and normally the entire process goes much faster, but for some reason Bad Nick insisted on taking charge and things took a little longer.

With all of that done, we hit the road and got onto Interstate 40, where we quickly got tied up in a major roadblock just as we started the long westbound climb out of town. It took us about 30 minutes to go ten miles, but eventually we cleared the construction zone that was delaying things, and got up to speed.

Since we would be climbing most of the trip, and it was a pretty warm day, I was concerned how the bus would do. The needle on the temperature gauge was riding at the upper level of our safe zone all of the way, but with our radiator misters on we did fine, and the bus purred right long. 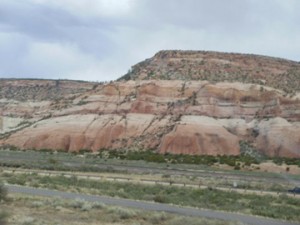 We passed through beautiful high desert country with mesas on both sides of the highway, and passed Indian communities that date back to long before the first Europeans ever set foot in North America. We may have taken their land, but the Native Americans are getting their revenge with a long string of casinos stretched along I-40 like a necklace sparkling with slot machines and neon signs promising riches untold to the lucky ones who hit it big. 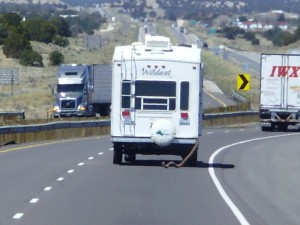 Somewhere in western New Mexico a pickup truck pulling a fifth wheel passed us and pulled into our lane, and we laughed when we saw his sewer hose trailing out of its bumper storage space. I tried to call him on the CD radio, but didn’t get an answer, and he was moving too fast for us to catch him. But thanks to the zoom lens on her camera, Miss Terry managed to get several pictures.

We eventually crossed into Arizona, and planned to stop at the State Welcome Center for a stretch break and a quick snack, but every parking space was filled with RVs. I wonder how many were also at the Affinity rally.

In Holbrook we got onto State Route 77 and made the 50 mile run to Show Low, pulling into the same campsite at Show Low Lake Campground that we had vacated when we went to Albuquerque. The trip took us five hours, which is a good day of driving.

My daughter Tiffany’s birthday was last week while we were in Albuquerque, so once we had the bus parked and unpacked a bit, we met Tiffany and her family at a restaurant for a belated birthday dinner.

By the time we got back to the bus it was dark and we were pretty well worn out. But we’re not done yet, today we’ll drive the van to Flagstaff to pick up the new issue of the Gypsy Journal from our printer. Then Terry will be busy stuffing envelopes for the next few days to get them ready to mail. Our life is never dull.

Thought For The Day – People who don’t have a life of their own spend a lot of time criticizing those who do.