Many of you know that I have a phobia about driving over bridges. Yeah, I know, that bridge has stood for years, it’s inspected periodically, and a thousand cars a day drive over it. But I just know that if that darned thing is going to commit bridge suicide and collapse, it’s waiting for me to come along so it can take me with it!

Yesterday on our drive to Nevada, we crossed Hoover Dam and Miss Terry got some great pictures of 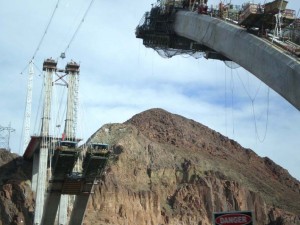 the new Colorado River Bridge project that is being built to span the canyon above the dam to divert traffic away from the dam itself.

I can tell you right now that there is not enough money in the world to pay me, or enough drugs to calm me down enough that I’ll ever drive or ride across that bridge! I think the guys building that thing must be half monkey and half mountain sheep, and whatever they’re paying them isn’t enough. The bridge is erected on both sides of the canyon, and the center sections still have to be put up. It’s a 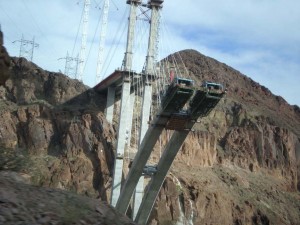 massive engineering project, and there were crowds of people stopped at the dam watching the progress.

Speaking of mountain sheep, we had to stop at the safety inspection checkpoint a few miles from the dam on the Arizona side, and just as we pulled back onto U.S. Highway 93, Terry spotted a beautiful ¾ curl ram standing on a hill right beside the highway! What a beautiful creature!

I mentioned yesterday that we were going to look at a RV for sale in the Las Vegas area. What a fiasco that was! Folks, I have met some hustlers in my time, con men who could charm the ears off the Easter Bunny. But I think we encountered the king of crooks. A week or so ago I saw an ad for a 2002 Winnebago Ultimate Freedom motorhome in the Phoenix newspaper, listed as like new, with 28,000 miles on it. I called the number in the ad, which was in Las Vegas, and was told that the rig was being sold due to a death in the family. The price and terms were right, so I said we’d come by and look at it.

Monday evening I called to say we’d be there yesterday, and arranged to call the seller, who said he was a relative of the owner, at noon when we were in the Las Vegas area.

When we got to town, I called as agreed, and he said he was hung up on something and to call back in an hour. Okay, unexpected things happen, no problem. We dropped off a sample bundle of newspapers at the Thousand Trails campground, stopped at a couple of stores, and then called back. All I got was voice mail.

We grabbed a bite to eat, and at 2:30 I had not received a call back. I tried one more time, reached the seller, and he asked if we could meet at 5 or 6 p.m. I told him no, we were headed back to Kingman if we couldn’t get together. He said he was having the rig detailed, and gave me an address to meet him at.

That address turned out to be his home, and his wife/girlfriend/bimbo said he would be there in 20 to 30 minutes. I learned a long time ago that if a deal feels bad going in, it won’t get any better once you’re stuck. By now I already knew we were not going to deal with this clown, but I wanted to play it out and see what happened. Finally, at 3:45 the rig pulled up, ran over the curb, and a guy stumbled out who probably spent the morning on a street corner with a sign that said “Will Work For Food.” As it turns out, he was not the seller, but the fellow who “detailed” the rig.

When we stepped inside, it reeked, it was filthy, and it was beat to pieces.  The carpets were stained, the curtains were falling off, the counter top was cracked, it smelled of sewage, and crud was everywhere. The guy tried to tell Miss Terry that all RVs smelled that way when you drive them, and she quickly cut him off and told him that we’re in the RV industry.

Looking at the odometer, the rig actually had 59,833 miles on it, the sliding side window was smashed, and the data plate identified it as a 2000 model, not a 2002. To top it all off, there was a Las Vegas Auto Auction bid sheet on the dashboard! Yeah, right, a death in the family. I’d have had to been brain dead to believe any of this crap!

It didn’t take us long to get out of the piece of junk, and then I looked at the street side, and one bay door was completely caved in! I teach a class on how to buy an RV, and this heap was worse than any example I’ve ever given my students. It was junkyard material, as far as we were concerned.

As we were leaving, the seller called me on my cell phone, and was amazed that I wasn’t falling all over myself trying to get my checkbook out fast enough to complete the deal! I was born early in the morning, but it wasn’t early that morning!

Thought For The Day – He who dies with the most experiences wins.