Nick's Blog » Fulltiming Is A State Of Mind

In a blog post titled Am I a Full-timer? I think so… on the RV.Net Blog, Tony Cornett, known as Firedude to his many followers, writes about going to visit family in his old hometown over Easter, and realizing he is indeed a fulltime RVer, not just a weekend warrior.

Some of the clues were subtle, such as wandering through his brother’s home and being amazed at how much “stuff” they have, or that his brother has more stuff crammed into his garage than Tony has in his entire RV.

Other clues were more obvious and we’ve experienced them ourselves when visiting family and friends. Have you ever tried to flush the toilet in somebody’s house with your foot? If you have, you might be a fulltimer! Been there, done that. How about staying at a friend’s house, and turning the water off in the shower while you lather up? My friend Terry Simpson says that when he returns to his home in Mitchell, Indiana after a winter on the road in his bus conversion, he does the same thing.

Tony’s column hit home with me because we are currently visiting our old hometown of Show Low, Arizona. We’ve enjoyed visiting with my daughter and her family, and our friends here, but I’m amazed at how much space they take up and how much stuff they have to fill that space. My daughter and son-in-law live in a rather small two bedroom apartment, which gets cramped with two little girls growing up fast in it, but their place seems huge to us.

I was talking to a friend of mine the other day and he said he envied the fact that we have escaped the rat race. He knew us back in the days when we worked 60, 70 or more hours a week. He had just returned from a visit to his wife’s family, down in the Phoenix area, and said it was sad how her kids and grandkids were fixated on having the newest electronic gadgets, or the latest and greatest hybrid yuppie-mobile. Terry and I don’t need much more in life than each other, a gentle tailwind when we’re going down the highway, and a level, quiet place to park for the night.

Unlike Tony, we have not driven by our old house while we’ve been in town. The place holds no special significance for us. It was just a place to eat and sleep in between our workaholic days. When we left, we put that part of our lives behind us.

But we’ve felt at home all over this country, whether we’re parked in a nice campground on the Texas Gulf Coast, boondocking under a starry desert sky, or grabbing a few hours’ sleep in a highway rest area or Wally World parking lot. We could never go back to our old lives.

In yesterday’s blog I mentioned the fishing opportunities here in Arizona’s White Mountains. While trout, bass, and walleye are the big three for anglers who fish our local waters, one often overlooked species are catfish. But there are some real lunkers waiting for the lucky fisherman (or fisherwoman) who knows how to hook them. 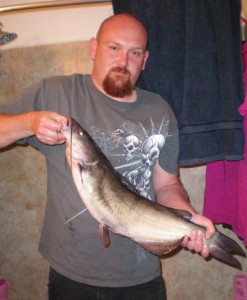 Here is one my son-in-law, Jim, caught yesterday evening at Fool Hollow Lake here in Show Low. The 150 acre lake is part of Fool Hollow Recreation Area, an Arizona State Park that includes 92 RV sites, many with full hookups, as well as 31 primitive sites. Fool Hollow got its name when an early settler began to farm the land now covered by the lake’s waters, and his neighbors joked that “Only a fool would plow that hollow.”

Thought For The Day – Cleaning your house while the kids are still living at home is like shoveling the walk before it stops snowing.