Yesterday was a gray and gloomy day in the desert. Heavy clouds and a chilly wind reminded us that while we may be in Arizona, it is still February.

During the morning we did some banking, mailed out a stack of orders that had come in last week while we were busy with our rally, and ran a few other errands. Then we went back to the bus, and I tried to work on the computer for a couple of hours, but I just couldn’t concentrate. It was a good day for a nap and I was getting droopy, so finally I stretched out on the couch.

While I was being lazy, Miss Terry did some laundry and made up a batch of dough for homemade pizza. We love pizza, and I’ve never found a restaurant that can make pizza like my bride does. I woke up just as she was taking a scrumptious pizza out of the oven for dinner. Yummy!

I wrote a few days ago that we plan to spend some time in the Pacific Northwest this summer, and I logged onto the Thousand Trails website and booked us a total of six consecutive weeks at Thousand Trails and NACO preserves in two week intervals along the Oregon and Washington coasts. We’ll start at the South Jetty preserve in Florence, Oregon; then move on to the Pacific City campground in Cloverdale; and from there we’ll go to the Long Beach preserve in Seaview, Washington.

We love the Pacific coast, and some of our favorite memories of our fulltime RV lifestyle are those from our first summer on the road, when we spent several weeks meandering down Highway 101, exploring the beach towns, lighthouses, and working fishing villages from the tip of the Olympic Peninsula to the California border. 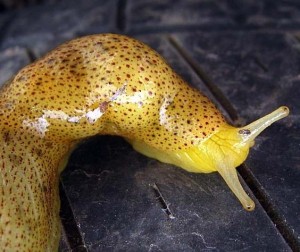 It was here that Miss Terry was first introduced to the banana slug, one of the slimiest and most disgusting creatures you’ll ever encounter. The Pacific banana slug can be over nine inches long, and that’s a lot of ugly!

I still remember the first time I spotted one of these snails without a shell, and decided that it would make great fishing bait. What fish could refuse such a fat offering when I stuck it on my hook and threw it into the water?

Have you ever actually touched a banana slug? If not, take my word for it. Don’t do it! It took me forever to get the sticky goo off my fingers?

We also want to get up to Port Townsend, Washington to spend some time at the Escapee park there. Port Townsend is a picturesque little town, with a lot of history and plenty to see and do.

There are a several other places we want to visit, including the beach town of Seaside, Oregon and historic Astoria, Oregon, at the mouth of the Columbia River; as well as Westport, Washington, with it’s charter boats, commercial fishing fleet, and beautiful lighthouse.

The last time we were in Lincoln City, Oregon we actually saw a couple of gray whales playing in the harbor, and we want to go back and see if we can spot some more!

Thought For The Day – Life is simpler when you plow around the stump.

6 Responses to “More On Our Summer Travel Plans”