After a month at the Pinal County Fairgrounds in Casa Grande, we left yesterday and drove an hour south to Tra-Tel RV Park in Tucson, our home for the next month. Tra-Tel is a small, comfortable park which has been a regular stop for us ever since we hit the road.

I asked one mother why she was allowing her kids to do this when there were plenty of water outlets all over the fairgrounds, and she responded by saying that this was the only place that wasn’t muddy. It sure was by the time those morons were finished! 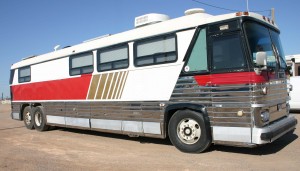 Terry and I have been doing a lot of talking about our needs in a fulltiming rig. We have been comfortable in our MCI bus conversion, and it has served us well for eight years now. However, we have come to realize that the time is coming when we will need to replace it.

The bus has a lot of life left in it, and would be a comfortable home on wheels for someone who does not put on the amount of miles we do every year. But we travel much more than most RVers and have outgrown it.

Now what to do? We have considered several options, from buying a newer bus shell and converting it, to building a truck conversion, to (gasp) buying a used production model diesel pusher. Each has its pros and cons.

As far as I’m concerned, nothing beats a bus conversion for safety and cargo carrying capacity. We could buy a newer shell, with a bigger engine and more power, but it would still have at least half a million miles on it. And then we still have to convert it, and that is a lot of work. We’re both 56 years old, and we wonder if we really want to start another major project like that again.

I’m enamored with truck conversions, and these days we could buy a fairly late model semi with a modern 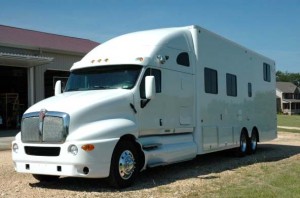 engine for around $20,000. But then we’d need to have the frame stretched, build the box, and build the conversion. Again, a lot of work.

The third option, finding a used diesel pusher, may well be the best for us at this stage in our lives. I’ve seen a lot of nice rigs at attractive prices lately. I’m no huge fan of many production model RVs, but if we could find a well built diesel coach by a reputable company, we think we could be very happy in it.

But we would need to sell our bus conversion to buy something else, unless we could trade it in and arrange some short term “creative” financing. Right now there are a lot of RVs for sale, so who knows? We are in the looking stage, and keeping our options and our minds open to what may come along.

Thought For The Day – A man without a purpose is like a ship without a rudder.

7 Responses to “Considering Our Options”